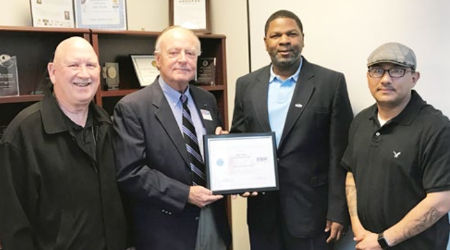 The Pacific Harbor Line (PHL) has received the Patriotic Employer Award from the U.S. Department of Defense Employer Support of the Guard and Reserve program.

The award honors employers' efforts to support members of the National Guard and Reserve.

The short line "takes pride in employing veterans and ensuring those who are active in this military role can fulfill their duties to both the railroad and in service of their country," PHL officials said in a press release.

Since 2010, the railroad has made hiring veterans a permanent part of its hiring program, added PHL President Otis Cliatt. In addition, 25 percent of PHL's workforce are veterans.

Cliatt, who has served on active duty in the U.S. Army, accepted the award on the railroad's behalf. Cliatt also completed a stint with the Florida National Guard from 1991 through 1996.