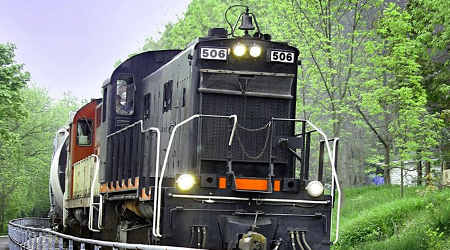 Guelph Junction Railway Ltd. will present at its annual meeting today a CA$100,000 dividend to its sole shareholder, the city of Guelph, Ontario.

The dividend is a first for the railroad. In December 2016, Guelph Junction Railway's board approved a dividend policy to ensure the railway's strategic growth while increasing shareholder value.

The railway operates on 24 miles of track from Guelph Junction near Campbellville, Ontario, to Guelph's northwest industrial park. The railway connects with Canadian Pacific and CN.

"City staff strive to operate the railway in a safe and profitable manner and have worked hard over the last three years to increase its financial performance," said Peter Cartwright, acting CEO of Guelph Innovation District, in a press release.

"Operating costs have been reduced, new business has been brought in and safety improvements have been made — all of this has resulted in this positive financial return and illustrates the company's collective objective of continued improvement," said Cartwright.

In 2017, Guelph Junction Railway received a CA$25,000 grant from Transport Canada as part of the Rail Safety Improvement Program. Some funds were used to improve the Macdonell Street grade crossing and remove a crossing at Elmira Road. Additional safety improvements will be made this year, railway officials said.