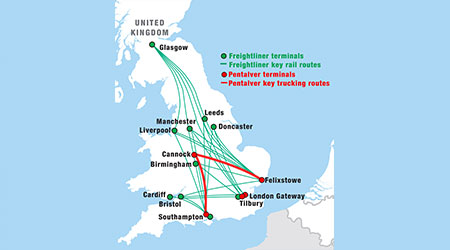 The acquisition is subject to final working capital and other closing conditions, G&W announced in a press release yesterday. Closing is anticipated for first-quarter 2017.

Based in Southampton, U.K., Pentalver operates off-dock container terminals placed at the seaports of Felixstowe, Southampton, London Gateway and Tilbury, as well as an inland terminal located at Cannock, in the U.K. Midlands. The terminals are located near many of the nation's largest distribution centers, G&W officials said.

In addition, Pentalver operates a trucking haulage service and container maintenance and repair services. The firm's operations are complementary to G&W's Freightliner subsidiary, the largest provider of maritime container transportation by rail in the United Kingdom.

"The acquisition of Pentalver is an excellent strategic fit with our existing intermodal offering in the U.K. With the advent of larger container ships and the growth of distribution centers in the Midlands and throughout the U.K., our maritime intermodal customers are seeking greater service optionality, which includes not only rail and road transportation but also the ability to store, maintain and position containers," said G&W President and Chief Executive Officer Jack Hellmann.