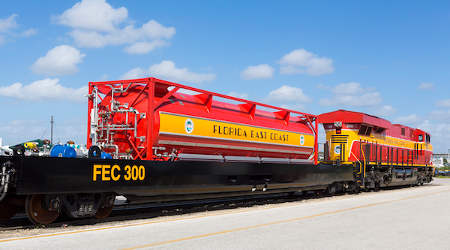 Florida East Coast Railway (FEC) last week offered a tour of its liquid natural gas (LNG) operations in Jacksonville, Florida, to U.S. and global representatives from a range of industries.

The tour was offered as part of the annual Natural Gas for High Horsepower summit, which was held in Jacksonville Nov. 6-9. The summit attracted participants from as far as Colombia, Japan, Korea and Canada, FEC officials said in a press release.

The tour offered several demonstration stations that exhibited LNG-powered locomotives with tender car between, a fueling station, an ISO container, an LNG tanker delivery trailer, and an LNG-powered truck.

"We are proud to be the first North American railroad to operate its entire mainline fleet on LNG," said FEC Chief Operating Officer Fran Chinnici. "We hope that our efforts will help other railroads and industries with this paradigm shift."

The 351-mile regional has been using LNG since late 2015 and earlier this year completed the conversion of its entire mainline thru-haul locomotive fleet to run on the gas. The railroad’s regional trucking subsidiary Raven Transport has converted 44 percent of its fleet to adopt the fuel.