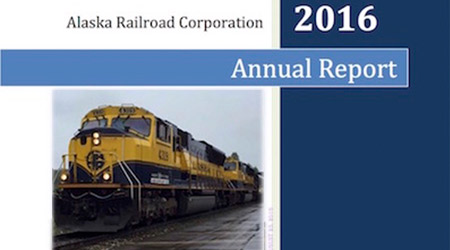 The Alaska Railroad Corp. (ARRC) on Monday released its annual report for 2016, which was another challenging year for the state-owned freight and passenger railroad.

ARRC registered a net loss of $4.4 million due to a 16 percent year-over-year drop in freight volume and an impasse with the city of Anchorage regarding the release of certain Federal Transit Administration (FTA) grant funds, railroad officials said in a press release. Refined petroleum product carloads moved to Alaska’s interior fell 23 percent and gravel loads tumbled 11 percent compared with 2015 figures, while export coal volume in 2016 only added up to one ship’s worth in Seward, they said.

“We’ve gone to great lengths to reduce expenses … particularly by scaling down freight operations to match the unprecedented decline in our revenue stream [since 2008] and by identifying initiatives for improvement and cost reduction,” said ARRC Chairman Jon Cook. “Unfortunately, it also led to the reduction of nearly 50 positions earlier this year.”

The disagreement with Anchorage on how to split FTA formula funds resulted in a $7.4 million loss for 2016, ARRC officials said. If not for the delay in receiving the funds, the railroad would have ended the year with $3 million in net income, they added.

On a brighter note, ARRC’s 2016 passenger-rail revenue climbed 6 percent on a year-over-year basis. The drivers: increased winter midweek service between Anchorage and Fairbanks during high demand times, and improved service performance, according to the annual report.