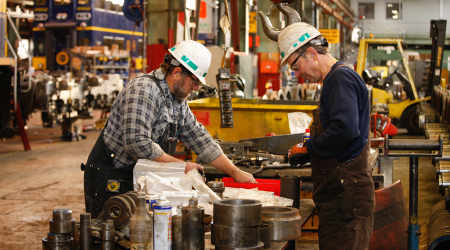 A railroad certainly wouldn't choose to chart its annual volume totals over a nine-year period with lines going down and to the right. But that's what the Alaska Railroad Corp.'s (ARRC) freight tonnage chart looks like for the years 2008 through 2016.

Low oil prices and the 2014 closure and 2016 scrapping of a North Pole refinery — which at one time generated half of ARRC's annual revenue — have cut crude/petroleum business by 84 percent.

At the same time, an oversupply of coal in world markets caused Alaska's only mine to curtail production, significantly shrinking the railroad's export coal moves from Healy to the Port of Seward and prompting ARRC to temporarily close its coal export facility in Seward.

"We've really been suffering the last few years. About two-thirds to three-quarters of our revenue comes from the freight side," says ARRC President and Chief Executive Officer Bill O'Leary, adding that the railroad also generates revenue from passenger-rail services and real estate holdings.

The regional's finances have reflected that pain. Net income has tumbled from $12.5 million in 2008 to $4.5 million in 2016. In addition, ARRC has recorded a net loss from operations since 2015 and forecasts a $4.9 million loss in the 2017 budget, and has incurred higher operating costs associated with labor and benefits, positive train control implementation and other business demands.

As a result, ARRC last month announced it eliminated 49 positions under a corporate restructuring plan. The reorganization represents an 8 percent reduction in the regional's year-round workforce — which totals 609 versus the seasonal workforce of 760 — equating to an estimated labor cost savings of $4.7 million.

ARRC began to address the job cuts last year, leaving 18 of the 49 positions vacant. ARRC has eliminated more than 300 year-round jobs since 2008, a period that includes three other layoffs.

"The eliminated positions weren't our first choice. But it became evident that we had to go back to adjusting our staffing levels," says O'Leary.

To shed costs, ARRC also reduced train operations between Fairbanks and Anchorage from two trains, seven days per week to one train, five days per week. In addition, the railroad plans to divest some assets that support export coal business, says O'Leary.

Despite its freight-traffic woes, ARRC has grown passenger counts 22 percent since 2010. Ridership — which last year rose 4 percent from 2015's mark to 494,236 — is increasing both because of local demand and tourism, says O'Leary.

"Visitors see Alaska as an exotic but safe location," he says. "The cruise industry has brought more ships to Alaska."

The railroad is projecting 5 percent ridership growth in 2017. As for freight traffic, it might at least stabilize this year, says O'Leary.

"We're optimistic that it will level out from where it was in 2016," he says.