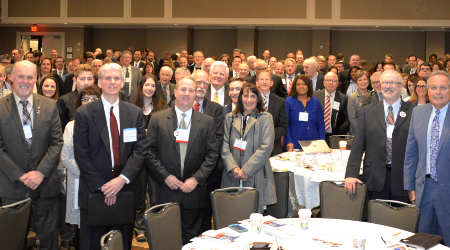 Congressional offices hosted meetings for 456 visitors — a record number of participants in the March 2 event, ASLRRA said in a press release.
Railroad Day on the Hill has been held annually since 1999.

A key point of discussion for short-line railroaders was the Building Rail Access for Customers and the Economy (BRACE) Act, which was reintroduced in both houses of the 115th Congress. The legislation calls for making permanent the 45G tax credit, which expired Dec. 31, 2016. The credit has helped short-line and regional railroads invest nearly $4 billion of private dollars into their rail infrastructure, according to ASLRRA.

Legislation supporting 45G has a 14-year track record of strong bipartisan support, according to ASLRRA. As of Monday, the BRACE Act had 82 cosponsors in the House and 15 in the Senate.

The bill removes the need to pass legislation every year in support of the credit, which would help short lines and regionals with their infrastructure investment planning, association officials said.