As he earns his CEO stripes, Peter Mills strives to put his stamp on the Indiana Rail Road 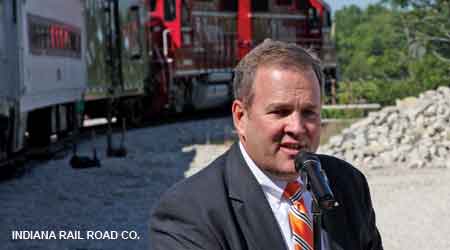 Peter Mills can empathize with Phil Bengston, who in 1968 followed legend Vince Lombardi as coach of the Green Bay Packers. Mills has succeeded short-line industry icon Tom Hoback as the leader of the Indiana Rail Road Co. (INRD), which grew more than 12-fold after Hoback founded it in 1986.

Mills is counting on the financial, sales and marketing savvy he’s developed — including skills derived from the short-line-like coal business unit — to continue to drive up traffic and revenue at the railroad that Hoback built. The regional now operates in central and southwest Indiana and central Illinois, and connects with various railroads in such major hubs as Indianapolis, Chicago and Louisville, Ky.

But Mills admits that meeting his business growth objectives won’t be easy, and not only because he’s replacing a respected and revered leader. Coal volumes that are vital to INRD’s financial fortunes continue to soften due to low natural gas prices and high utility stockpiles, he says. Two major coal customers expect to significantly shrink their carloads next year.

"This railroad has had continuous growth to both the top line and bottom line with coal, but that streak is going to end in 2016," says Mills. "So, we need to find ways to keep growing, to start a new streak."

It helps that the regional has a strong business base and “great customers,” he says. Credit for that goes to the organization built by the now-retired Hoback.

The former leader relied on his strong business skills, a customer-minded approach and a teamwork mentality to transform INRD from a Class III railroad earning less than $32 million in annual revenue to a Class II. Hoback also brokered a deal with Canadian Pacific in 2005 that helped expand the regional’s trackage from 155 miles to more than 500 miles.

He believes Mills — an INRD board member for 10 years who’s long been engaged in the regional’s matters — can maintain the entrepreneurial spirit that helped make the railroad successful the past three decades, drawing on a passion for business and zeal for commercial management.

"What impressed me most about Pete is his keen interest in business development," said Hoback in an email. "This level of interest, plus his bottom-line focus, make him a natural successor to me."

Building off a strong brand

Since Hoback will remain a board member, Mills can seek his counsel if need be. But Mills aims to place his own stamp on the regional. That, in part, means attempting to exploit more transloading and warehousing opportunities, and strengthen industrial development efforts.

Mills knows he’ll need more than his passionate drive and wide-ranging skill set to lead INRD not only through the coal business crisis, but beyond. He’s also keenly aware that his moves likely will be under the same type of scrutiny that Bengston encountered in Green Bay.

“I hear from customers who say, ‘Don’t screw it up,’” says Mills. “But I’m building off of a strong foundation and brand. We haven’t reached a point of pinnacle performance, and even Tom would say that.” 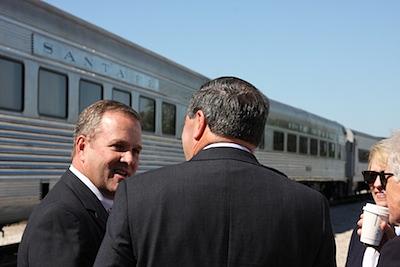 "We need to push and push for business, even if it annoys some customers by the number of times we contact them," says Peter Mills (at left).
Photo: Indiana Rail Road Co.

Guiding a regional to peak performance wasn’t on Mills’ radar in 1989, when he graduated from the University of Delaware after earning both bachelor’s and master’s degrees in business administration, with an emphasis on finance.

Although his father was a sales and marketing executive for CSX and the Baltimore and Ohio Railroad, Mills was interested in the finance world and believed he would become a financial planner or stockbroker, or work in financial administration.

Yet, CSX offered a management training program with a finance track that posed his best career-building opportunity after college, says Mills.

“I wasn’t hellbent on the rail industry. But through osmosis with my father, I knew the industry,” he says. “I was excited about the CSX training program, which was well structured.”

A quick start at CSX

After Mills completed the nine-month program, he took on financial tasks, such as analyzing capital spending projects and working with costing systems. Eventually, he became involved in line spin-off deals in the 1990s that led to the formation of several short lines.

He later became the finance director for the Cumberland Coal Business Unit, which CSX formed through an effort to “take a piece of geography and operate it like a short line,” he says. The unit was responsible for coal moving from West Virginia mines to CSX’s Curtis Bay facility at the Port of Baltimore.

For about two years, he managed finances for the unit, which had its own income statement and accountability measures, says Mills.

“The idea was to replicate what short lines do,” he says. “It was a different way of working and interacting with customers. It was more customer focused.”

His experience at the unit and with other facets of the Class I helped him develop a feel for the railroad business and establish more personal connections with customers, says Les Passa, who worked with Mills at CSX for more than 15 years.

“Pete is personable and engaging. He understands the economics of rail, and how to make money at it,” says Passa, a former VP of strategic planning who retired at June’s end. “He has lots of energy and knows how to apply it, and has a strong attachment to the short-line model.”

A senior finance leader for more than a decade, Mills built a reputation as a thought leader through his roles on CSX’s capital and strategic development committees, said Fredrik Eliasson, the Class I’s executive vice president and chief sales and marketing officer, in an email.

“He contributed to the strategic discussions around some of our biggest growth projects of the decade,” said Eliasson. “He prioritized value creation and drove bottom-line results that supported our ability to continue rewarding our shareholders.”

Mills also was more than a finance leader — he was well respected outside of that portion of the organization based on his sales/marketing and operations experience, said CSX President Clarence Gooden in an email.

“We know Peter is well-equipped to oversee the growth and development of the Indiana Rail Road,” he said.

Mills’ leadership and enthusiasm will be sorely missed, but the INRD leadership post is a great opportunity for him to continue creating value and to use his extensive skills to help shape one of the Class I’s key interchange partners, said CSX Chairman and CEO Michael Ward in an email.

Growing railroad is goal No. 1

Now, Mills is trying to apply what he’s learned and honed — including tips from Passa, Eliasson, Gooden and Ward, all of whom he considers mentors — to help grow the regional. Although he was satisfied and fulfilled while working at CSX, there were appealing aspects of the regional’s CEO post, a position that was brought to his attention by a fellow INRD board member.

“The things for me to think about were the less formal environment, the ability to see immediate results from decisions, the more sense of teamwork and the chance to join a company with a great track record of performance,” says Mills. “Plus, they have a very strong team in place already.”

He expects to lean heavily on the management team to find ways to offset eroding coal business, which accounts for about half of the regional’s annual revenue. Next year, Indianapolis Power & Light Co. — INRD’s largest customer — plans to convert its Harding Street Station generating facility from coal to natural gas, and Duke Energy Corp. expects to close its Wabash River coal-fired plant. As a result, the regional’s coal volumes will decline significantly.

So, team members will focus on the things they can control to help build traffic in 2016, he says. Among them: fostering timely and personalized service performance, continuing to cultivate close relationships with customers, emphasizing safety and continuing to invest capital in infrastructure improvements.

INRD has devoted significant capital to infrastructure for more than a decade, and ongoing investments will address future capacity and business-growth needs, says Mills. For example, the railroad plans to carry out the most aggressive bridge replacement program in its history in 2016 and 2017, including a 112-foot timber bridge near Newton, Ind.

Generating more volume in various other commodities will be key to absorbing the hit from coal, such as in grain, aggregates, steel, paper, chemicals and agricultural byproducts. Non-coal carloads are projected to exceed 53,000 in 2015, which would represent an increase of 30 percent in four years. This year, total carloads (including merchandise, coal, bulk materials and grain) are estimated to total 170,000, about the same as last year.

“One obvious way to offset coal is by working with existing customers, to get creative and continue to build relationships and trust,” says Mills.

That creativity, for example, could mimic what INRD accomplished for Peabody Energy Inc. in 2009, when Mills was a board member. The railroad worked out a pact with the company to exclusively serve its Bear Run coal mine in Sullivan County, Ind., which required the regional to spend $18 million to build a 5.2-mile industrial spur and loop track to link with a load-out facility.

Mills was a catalyst behind the deal, helping to provide Peabody a competitive rate to serve what essentially is a Powder River Basin-sized load-out facility in the Midwest, says Eric Powell, INRD’s manager of intermodal and economic development.

“It showed to Peabody that the Indiana Rail Road could be its sole [service] provider,” he says.

A bit more into intermodal

Another way to offset coal is to continue building intermodal traffic, which has blossomed since the 2013 opening of the Senate Avenue terminal in Indianapolis. INRD and CN use the terminal to target Chicago-area containerized goods moving to or from Asia via ports in Prince Rupert and Vancouver, British Columbia. The cargo can bypass Chicago terminals and congestion, and reach Indianapolis from ports in China and South Korea in 20 or 21 days.

After logging 12,563 containers in 2014, INRD expects to register 14,000 in 2015. Intermodal volume is tentatively projected at 15,650 units in 2016, but that figure might be revised upward to 17,000 units. One reason: anticipated new business. SABMiller Canada next year plans to begin moving containers of Miller Lite and MGD beer through the Indianapolis terminal via CN and INRD.

“We have some warehouse projects in the pipeline,” says Mills, declining to provide specifics.

Ultimately, if volume and revenue growth can be spurred from both existing and new customers, the railroad will be able to start a new period of sustained business growth after next year’s coal pinch, Mills believes. But to get to that point, the railroad’s managers and sales force “need to be relentless,” he says.

“We need to push and push for business, even if it annoys some customers by the number of times we contact them,” says Mills.