A short liner of another sort: Rio Grande Pacific finds a nonconformist style suited to its growth strategy

The proverbial saying “Different strokes for different folks” might best describe Rio Grande Pacific Corp’s. (RGPC) mission statement. The short-line holding company based in Fort Worth, Texas, aims to operate and grow in ways that differ from most other owners of multiple short lines.

RGPC’s first short line —  the Wichita, Tillman & Jackson Railway Co. — was formed in 1990 after a branch line in Texas and Oklahoma was acquired from UP. The company now owns four short lines that operate about 700 miles of track in six states, including the Nebraska Central Railroad, New Orleans & Gulf Coast Railway Co., and Idaho Northern and Pacific Railroad.

RGPC aims to take a proactive approach in forging strategic partnerships, managing efficient operations, and providing seamless transportation solutions and superior customer-centric service. It’s the company’s innovative thinking, entrepreneurial spirit and nonconformist style that will help pave the way to success in both the short-line and transit-rail industries, RGPC leaders believe. That mindset already has helped the company grow from two to more than 300 employees over the past 34 years.

RGPC has at times attempted to spur growth by acquiring other short lines — as many other holding companies in the industry do — but the price for those railroads was higher than the firm was willing to pay, says Robert Bach, the company’s president.

“We don’t plan to bid on other short lines,” he says. “We want to be creative, look for opportunities and take reasonable business risks.”

During its first 25 years, RGPC focused on operational performance and profitability. Since Bach joined the company in 2011, the growth strategy has been broadened and tweaked to include the development of more business ventures, even if some are considered unusual by short-line industry standards.

“It’s not a master’s degree expansion plan. It’s about finding opportunities where we are,” Bach says.

A prime example of that approach occurred in December when RGPC reached an agreement with UP to lease and operate a 163-mile Tennessee Pass line between Parkdale and Sage, Colorado. The company filed an exemption request with the Surface Transportation Board (STB) to obtain common-carrier authority. RGPC plans to form its fifth short line — the Colorado Midland & Pacific Railway Co. — to operate the route, and explore freight- and passenger-rail opportunities along it.

A more unusual example: RGPC in 2017 moved central dispatching from Norfolk, Nebraska, to Fort Worth and rebranded it as a separate revenue-generating unit named Rio Grande Pacific Dispatch (RGPD). It’s not common for short line companies to provide dispatching services to other small railroads.

Contracts with a few more short lines are slated to take effect in early 2021. In addition, RGPD for the past several years has provided dispatching services to the Denton County Transportation Authority (DCTA), which operates the A-train commuter-rail system near Dallas and Fort Worth.

It was more difficult to staff the dispatch center in Nebraska, says Bach.

“Fort Worth is a better place to turn it into a business,” he says. “The center has been successful in bringing in revenue.”

To be located along an NOGC line, the 200-acre terminal will become the largest oil export facility in the Western Hemisphere when it’s completed in 2022 or 2023.

“Your location defines what you do,” says Bach. “The liquid terminal has been in the planning stage for a while, and will start soon.”

RGPC also is working with the Port of Plaquemines on a long-planned container port.

“It would be a big change to NOGC’s business if it’s built,” says Bach.

The short line scored something big in September 2020, when it learned an $8.2 million Consolidated Rail Infrastructure and Safety Improvements Program grant was coming from the U.S. Department of Transportation. Combined with matching funds from RGPC, the grant will cover the cost of improving a 32-mile line in Belle Chasse, Louisiana. The work includes the rehabilitation of two moveable, vertical-lift bridges and the replacement of embedded rail.

One bridge was built in the 1930s and the other in the 1950s, so upgrades to the structures are vitally needed, says Bach.

“We are anticipating a traffic increase at the NOGC,” he says. 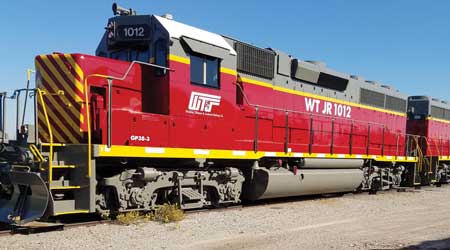 Traffic will soar for RGPC if the planned Uinta Basin Railway is constructed in Utah in the near future. The Seven County Infrastructure Coalition in Utah is working with Drexel Hamilton, RGPC and the Ute Indian Tribe to develop an 85-mile rail line to transport heavy crude from Utah to points along the U.S. Gulf Coast and in Canada.

The basin’s oil is trucked to Salt Lake City refineries because it’s too thick to be transported in pipelines, and limited takeaway capacity restricts the oil from reaching Gulf Coast and overseas refiners.

RGPC’s role in the $1.2 billion to $1.5 billion project came about by a combination of networking and happenstance.

“We were having a meeting with the Plaquemines liquid terminal funding group, and during a coffee break, we discussed other projects they were involved in, and the Utah line came up,” says Bach. “We decided to find ways to work on it together, and we did.”

The state doesn’t want to rely solely on two-way highways to move crude oil, and decided rail was an ideal solution, says Mark Hemphill, RGPC’s senior vice president of program management who manages the Uinta Basin project. Utah needed a commercial partner since the state is not in the business of financing or operating a railroad, he says.

The  STB issued a draft environmental impact statement (EIS) on the project in October 2020 and accepted comments on it until Dec. 14. Utah’s two senators and three of its four U.S. representatives wrote a letter to the STB stating support for the project. (Editor's note: The STB extended the EIS comment period until Feb. 12, 2021.)

The board is expected to issue a final EIS in March and then complete the review process in mid-2021. Permitting still is required from the U.S. Army Corps of Engineers and other agencies.

If everything is accomplished by fall 2021, final design would begin and take about 12 to 18 months to finish, Hemphill says. Construction could start in early 2023 at the earliest, with completion in late 2024, he estimates.

“They all are equal hurdles: the EIS, permitting and financing. The project will be 100% privately funded,” he says, adding that the state provided $27.9 million for the EIS.

Private equity firms and people who like to invest in infrastructure are showing interest in the project, Hemphill says. After the line is built, RGPC would interchange traffic with BNSF Railway Co. and UP.

“We have had productive discussions with both,” says Hemphill.

Such a project required vision from a corporation that isn’t only focused on conventional methods of growth, he believes.

“It helped that RGPC has large enough resources, but isn’t so large a company there’s bureaucracy,” says Hemphill.

Involved in transit, too 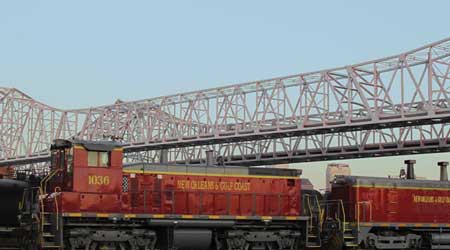 The New Orleans & Gulf Coast Railway will begin to reap the traffic benefits from a $2.5 billion liquid terminal in Plaquemines Parish, Louisiana, when it opens within the next two years.
Rio Grande Pacific Corp.

There’s nothing conventional about RGPC’s efforts to become a passenger-rail service provider. Those efforts began in 2016, when First Transit Inc. reached out to RGPC’s signal company via mutual acquaintances about providing services to the DCTA.

In June 2016, First Transit obtained a long-term rail operations and maintenance contract from the DCTA, one of the largest contracts in the authority’s history and the British transit company’s first contract in the United States.

What started as a phone call from First Transit morphed into RGPC providing infrastructure maintenance and dispatching services for the DCTA, while First Transit managed operations and car maintenance, says Bach.

Last year, First Transit withdrew from the DCTA, and RGPC won a bid to obtain the rest of the operations and maintenance contract. Car maintenance work then was subcontracted to Stadler U.S. Inc.

The First Transit employees at the DCTA were retained to leverage their expertise and forge a more seamless transition, says Bach.

“We had developed a relationship with First Transit and the DCTA, and developed expertise in commuter rail, which will be a boost to our bottom line [this] year,” he says. “We plan to pursue other opportunities in commuter rail, and to bid on more of them regionally. We have learned a lot.”

RGPC also learned in 2020 that the pandemic didn’t crush its business fortunes. Volume and revenue were fairly solid in part because the markets served by the company weren’t as impacted as other sectors, says Bach. RGPC’s short lines handle a diverse mix of commodities in the agricultural, chemical, lumber, mineral and recycling sectors.

“Business also looks good for us in 2021,” Bach says, adding that prospects appear particularly promising for the NOGC and Nebraska Central.

“The grain sector is coming around. The dark spot I see is the dry weather in the Plains and other parts of the United States. Will it continue? Who knows,” he says. “Frac sand took a hit but is coming back a bit. Oil producers [wanted] to drill some holes by the end of 2020.”

RGPC is gaining some traffic from energy projects, such as wind components and pipe for pipelines, and ethanol is coming back. But agricultural products are the company’s No. 1 commodity, such as corn and soybeans. China began to buy soybeans and corn from the United States in big volumes in mid-2020, and there could be strong grain demand in 2021, Haeg believes.

“We see stout numbers in the upcoming crop year. The [U.S. Department of Agriculture] is forecasting a 45% to 50% increase in corn, and I don’t think they’re off,” he says.

A customer involved in both ag and non-ag products told RGPC leaders they expect to triple their traffic with RGPC because of promising world trade.

The company also has been receiving calls from potential customers who cite high truck rates and other trucking issues, says Haeg. That could translate into more volume.

“We’re getting a couple of calls a week, so I’m sensing a pattern,” says Haeg. “One customer called about moving bentonite in bags, which usually moves by truck.”

Those objectives can be met as long as RGPC sticks to its entrepreneurial and nonconformist bent. It helps that the company’s management team is assembled in one place and that the firm functions in an informal yet highly productive manner, says Haeg.

“We are low-key people and we fly under the radar a bit,” he says. “We are not big on formal meetings and presentations. A five-minute meeting in a hallway can get things done.”