Now a 30-year-old regional, Montana Rail Link continues to mine carloads both solo and with BNSF 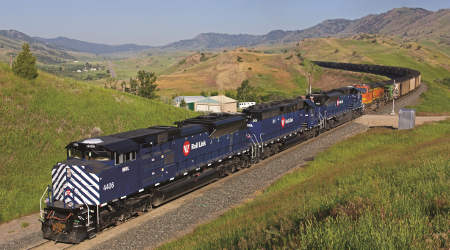 Montana Rail Link (MRL) launched operations on Halloween in 1987. Although that typically wouldn’t be considered an ideal startup date, the regional has largely avoided ghoulish twists or devilish turns over the past 30 years when it comes to business growth.

Owned by The Washington Cos., MRL operates more than 900 miles of track mostly in Montana, with some lines crossing into Idaho and Washington. The regional employs 1,100 people, serves 125 customers, and maintains eight yards and three shops. Headquartered in Missoula, Montana, MRL interchanges with BNSF Railway Co. in Laurel and Garrison, Montana, and Spokane, Washington.

The regional was formed after The Washington Cos. founder Dennis Washington leased Burlington Northern Railroad’s mainline between Sandpoint, Idaho, and Huntley, Montana, near Billings.

One of the 57 remaining employees who have served MRL from the get-go is President Tom Walsh. He joined the railroad two weeks before launch as director of general accounting, later was named chief financial officer and became president in 2003.

Being among the company’s original 700 employees was a unique opportunity because each worker was “the new guy,” says Walsh.

“We were all in this adventure together, which helped create a feeling of family from the beginning,” he says. “It’s a cohesive group of people, and that still holds true.”

Joining the adventure from the start also enabled Walsh and his long-serving colleagues to witness the railroad’s good times and bad times over the past three decades. It didn’t take long for the bad times to roll: Just hours after launch on that Halloween day in ’87, an unmanned locomotive became a runway on MRL’s line. Fortunately, it was corralled without incident.

Since then, though, there have been mostly good times, business growth-wise, says Walsh. For example, gross tons have nearly tripled in 30 years from 25 million to 70 million. 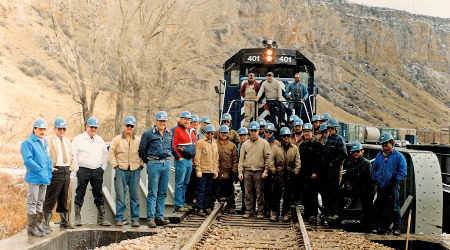 A portion of the regional's workforce as photographed in 1988.
Montana Rail Link

Traffic levels in that timeframe have run the gamut from strong to moderate to weak to moderate to strong, which hardly constitutes a perfect growth line, says Walsh. But carloads mostly have flourished since 2003, he adds. The regional moves coal; chemicals; building materials; agricultural, forest and petroleum products; non-metallic minerals; and ores and concentrates.

A supplemental agreement MRL reached with BNSF in 2012 has helped boost volume of late. Because of the pact — under which MRL agreed to take on more of BNSF’s traffic in Montana — the regional has logged 300,000 additional carloads in the past five years compared with the base year of 2011, says Walsh.

In 2017 alone, BNSF traffic associated the agreement will reach 65,000 carloads — the highest yearly amount since the pact was forged. Walsh expects the annual total to continue climbing.

BNSF reached out to MRL because of the regional’s service and network, he says.

“They have a higher-speed route in Montana, while our route runs about 100 miles fewer for getting to ports and the Pacific Northwest,” says Walsh.

In terms of building its own traffic, MRL’s best opportunity is export coal. The regional supplies domestic coal to utilities in Oregon and Washington, but the utilities plan to cease coal operations sometime in the 2020s, says Walsh.

MRL helps move export coal from the Powder River Basin in Wyoming and Montana, and Signal Peak mine near Billings to the Roberts Bank terminal in Vancouver, British Columbia.

“Depending on the political climate and demand for U.S. coal in the Pacific Rim, we can grow export coal,” says Walsh, adding that total coal carloads likely will reach 130,000 units this year and 150,000 next year.

Meanwhile, MRL continues working on infrastructure improvements to accommodate traffic growth. The regional at one time had 100 miles of jointed rail on its mainline, but by 2006, the entire line was fortified with continuous-welded rail. 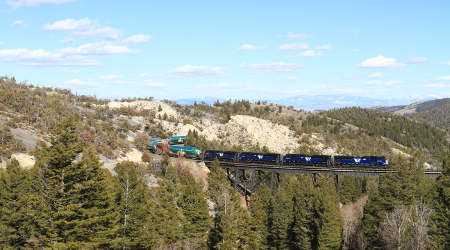 Now, the railroad continues to focus on replacing 115-pound rail — which at one time covered nearly half of its network — with 132-, 136- or 141-pound rail. The staggered effort that has been ongoing for a number of years, says Walsh.

“We have been replacing it in eight- to 12-mile sections each year,” he says. “We believe we can finish replacing it all in the next work season.”

The heavier rail plus longer sidings are helping to accommodate grain trains, which over time have lengthened from 52 cars to 110 cars, he says.

For MRL, adaptation has been necessary over its first 30 years — and will continue to be key in the future — to meet shippers’ evolving needs.

“We need to get more and more efficient in this changing business environment,” says Walsh. “For example, we use distributed power on every train now.”