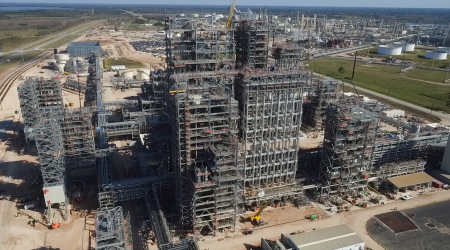 Chevron Phillips Chemical Co. LP's $6 billion petrochemical construction project on the U.S. Gulf Coast has reached a milestone with the completion of mechanical work on its two polyethylene (PE) units, the company announced this week.

Based in Old Ocean, Texas, the PE units are now undergoing commissioning activities, system checks and final certifications to ensure a safe and reliable startup. When operational, each unit will produce at least 500,000 metric tons of product annually, company officials said in a press release.

"These new units allow us to utilize the abundant natural gas liquid feedstocks provided by the development of shale resources in the United States to meet the growing demand for polyethylene from our global customers producing performance films, high-pressure pipe and packaging," said Peter Cella, the company's president and chief executive officer.

Ethylene feedstock for the new units will be supplied via the company's ethylene pipeline and storage system that also was expanded as part of this project.

Additionally, the company purchased 3,000 rail cars and built a rail facility with the capacity to store 1,500 rail cars to ship PE pellets to customers worldwide.

The rail facility will be dual-served by BNSF Railway Co. and Union Pacific Railroad, according to a spokesman for Chevron Phillips Chemical.