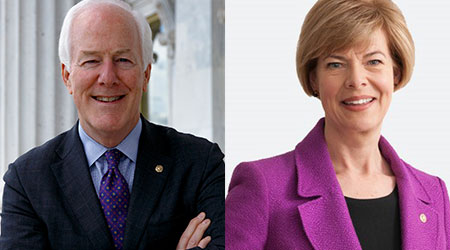 Co-sponsored by U.S. Sens. Mike Crapo (R-Idaho) and Sherrod Brown (D-Ohio), the bill would create a certification process for transit agencies to ensure their funds are not being used to purchase rolling stock from a Chinese manufacturer. A narrow exception would be made for agencies with a pre-existing contract or subcontract with such a rail rolling stock manufacturer executed prior to the enactment date, Sens. Cornyn and Baldwin said in a joint statement.

There are a number of threats those procurements pose, including impeding economic competitiveness and overtaking the supply chains that support United States public transportation agencies, they said. Chinese state-owned and state-supported enterprises also have increased security vulnerabilities and create new risks for rolling-stock procurements, they believe.

"China poses a clear and present danger to our national security and has already infiltrated our rail and bus manufacturing industries," Cornyn said. "This legislation will help safeguard against this threat."

Added Baldwin: "China has made clear its intent to dismantle U.S. rail-car manufacturing. Our economic and national security demands that we address Chinese attempts to dominate industries that build our nation’s critical infrastructure."

The bill also would ensure transit agencies develop and execute a cybersecurity plan. Given the level of technology and growing complexity of rail rolling-stock assets, it’s imperative that proper cybersecurity standards are in place, Cornyn and Baldwin said.

The legislation would require any agency that operates transit-rail service to develop and execute a plan for identifying and reducing cybersecurity risks. Recipients of federal transit assistance would be required to review best practices and identify any hardware and software components of new rolling stock assets that should undergo third-party testing.