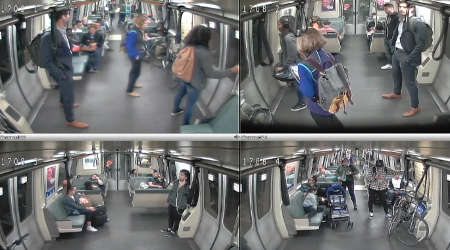 Bay Area Rapid Transit (BART) has finished installing security cameras in all of its rail cars, the agency announced yesterday.

The new cameras are aimed at bolstering BART's existing security infrastructure network, which includes other cameras on platforms, inside and outside stations and on police officers themselves.

Each car has four cameras on board.

"These cameras will be an effective tool for solving crimes that occur on the BART system by helping investigators to identify suspects," said BART Police Chief Carlos Rojas in a press release. "The devices will also serve as a deterrent to prevent some crimes from ever occurring in the first place."

The cameras have a useful lifespan of six to seven years. That coincides with the time it'll take for the aging rail cars to be retired from service as BART welcomes its "Fleet of the Future" units.

In August 2016, BART's board approved contracts worth $463,749 to purchase the cameras, digital video recorders and box housing units after testing various models. Including labor and other materials, the full cost of the project was $1.42 million.

The work was funded through BART's operating budget.

In January 2016, BART announced plans to install cameras on board every rail car after a fatal shooting aboard one of its trains. Since the incident occurred on a car with a decoy camera, the agency wasn't able to capture footage of the homicide.