WMATA to beef up police patrols on trains, buses 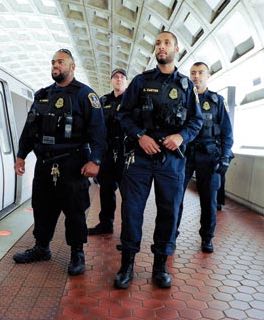 Photo: Washington Metropolitan Area Transit Authority
WMATA's police department will transfer responsibility for securing revenue to an outside firm, which will make 11 officers available immediately and an additional six officers within 60 days, agency officials said in a press release. Currently, some officers on patrol spend a portion of their tour on revenue protection duties.

Using the external firm will enable the agency to increase the overall size of its police operations bureau by more than 5 percent, WMATA officials said. These additional officers will be assigned to patrols based on crime trends.

WMATA's police department also will strategically use overtime to overlap the day and evening shift officers on selected days and at selected locations. By having the two shifts overlap, the number of officers on duty can nearly double during hours when patrol coverage is needed most, such as late-afternoon or evening hours.

Officers that are unable to perform full duty but are cleared to work in a limited capacity will be reassigned to key stations based on crime trends. These officers, who may be in vests or casual clothes, will be equipped with police radios to summon on-duty transit police officers when needed.

"Every Metro rider deserves to be able to travel freely without fear, and we will take all appropriate steps to reassure riders and respond to crime trends," said WMATA Transit Police Chief Ron Pavlik. "At the General Manager's direction, we will take immediate steps to increase patrols using our existing resources."

The agency's decision to amp up police presence follows a shooting on a Green Line train this week and several recent assaults, the Washington Post reported.