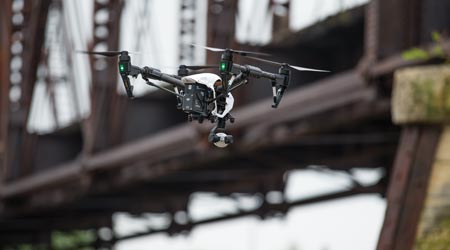 For years, railroads have been exploring automation to help improve overall operations. To that end, they've invested in a host of new technologies, such as Machine Vision, predictive analytics and driverless train systems — to name just a few examples.

The next chapter in the rail automation story may involve unmanned aerial vehicles (UAVs), more commonly known as drones.

These versatile, often camera-equipped devices could help railroads tackle everything from track inspection to yard security to vegetation management, UAV industry experts say. Although the technology holds promise for the rail industry, a few challenges remain, including regulatory and data management issues.

"We like to say that using a drone is better, faster, cheaper and safer," says Dennis Wierzbicki, rail industry adviser for Unmanned Experts Inc., which conducts rail-bridge inspections with UAVs and offers general drone consulting and training.

Because drones are small and nimble, they can more easily access places that otherwise would be precarious to reach. That means less risk of injury for railroad workers, Wierzbicki says.

Plus, drones can withstand a range of weather conditions, including wind, low temperatures and moderate rain or snow.

Drones also produce a dizzying array of data about the assets they're monitoring. Finding a way to sort, understand and leverage that data remains a challenge, says BNSF Railway Co. Telecom Director Todd Graetz, who oversees the railroad's drone program and operations.

So, the Class I has co-developed a suite of software to help manage, analyze and distribute all the information its drones collect.

"We are constantly exploring new ways to further leverage the massive amounts of data our UAVs gather daily," Graetz adds.

In May 2015, BNSF was chosen as one of three companies to participate in the Federal Aviation Administration's (FAA) Pathfinder program, which is aimed at exploring the commercial use of UAVs. The other two companies: national news channel CNN and drone maker PrecisionHawk.

And in October that same year, the Class I partnered with drone manufacturer Insitu Inc. for the railroad's first long-range drone flight.

At the moment, Insitu doesn't have any active programs with BNSF, but the company remains open to working with the railroad in the future, says Paul McDuffee, Insitu's associate vice president of government relations and strategy.

Other rail clients also reached out to Insitu following the company's work with BNSF, says McDuffee, though he declined to name them.

For BNSF, drones have provided another layer of safety to operations, Graetz says. For example, the railroad can use a small rotorcraft to inspect bridges and gain perspective from vantage points that previously were inaccessible.

The Class I uses two kinds of UAVs: a multirotor aircraft and a hybrid fixed wing model. Both are equipped with sensors that can deliver infrared data, along with high-definition video and photos.

The multirotor aircraft is operated at lower altitudes to examine areas around and underneath bridges.

"These aircrafts are excellent tools to supplement our bridge inspection processes," Graetz says. "Particularly for large bridges, or bridges over waterways and canyons, our inspectors and engineers are able to see what can be the most difficult places to reach on a more frequent basis." 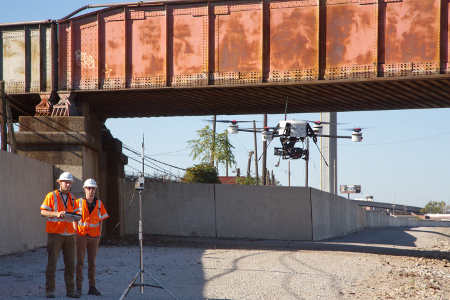 That's the message that Unmanned Experts leaders hope to share with others in the rail industry. The company uses UAVs to produce reports that meet federal standards for bridge inspections and feature high-resolution images to better illustrate any problems. In addition, Unmanned Experts' reports are interactive and allow users to focus on specific findings.

The company also uses a process known as computer vision analysis to track trends over time. For example, a railroad could compare several reports to keep tabs on a crack or other flaw in the bridge. Another possible application involves monitoring areas of corrosion, such as rust.

The company aims to help out in the data management realm, too: Unmanned Experts has created a process to organize the photos drones take.

In addition to bolstering safety, using drones can help drive down costs and improve efficiency. While UAVs won't necessarily replace the need for human inspection crews, railroads could use the technology to more efficiently deploy workers, says Insitu's McDuffee.

"If you can get a large-scale, big-picture look from an airborne solution, you can surgically place crews to make repairs or to confirm an anomaly in the track, as opposed to requiring [workers] to go out and roll down hundreds of miles of track," he says.

UAVs also could ease railroads' project management burdens. For example, project staff may not need to travel to the site of a bridge inspection because drones are providing them with up-to-date, high-resolution images of the structure.

The technology could play a role in railroads' positive train control (PTC) efforts, as well.

"UAVs are helping with the implementation of PTC by assisting in the surveying of sections of our right of way and rail yards, as well as the validation of the various assets needed to implement PTC, including radio towers, switch locations and signage," Graetz says.

Drones also might prove useful in a security context. For instance, railroads could deploy a drone ahead of trains to check for external threats. UAVs also could be used to detect vandalism and theft, adds BNSF's Graetz.

And in the event of a derailment or chemical spill, drones could be flown ahead to assist first responders. Sensors even could be installed on drones to detect airborne gases or contaminants after a spill.

Adding sensors to drones opens up a host of possibilities.

"A variety of sensors can be flown on these systems to detect anything from soil moisture content to track alignment issues and cracks in the rails themselves," says Insitu's McDuffee.

That's something that may be beneficial for those in the agricultural industry. PrecisionHawk's drones feature sensors that can assess water quality and perform vegetation analyses.

Still, railroads face a slew of regulatory challenges regarding drone use. For example, UAVs need to weigh less than 55 pounds, per FAA rules. Additionally, drones must be flown within the line of sight from the operator, which isn’t ideal for monitoring or securing hundreds of miles of track.

"We've got a patchwork quilt of regulations across the country," says Insitu’s McDuffee. "Even if the FAA's concerns about flying are allayed, we've still got to deal with state and local entities who are attempting to prohibit or restrict drone use over their airspace."

The FAA does provide waivers to its rules on a case-by-case basis. For example, PrecisionHawk has obtained a waiver that allows the company to perform beyond line-of-sight flights.

In addition to the regulatory hurdles, railroads need to figure out how they'll incorporate drones into their existing workflows and weigh the technology's overall value, PrecisionHawk's Haun says.

As long as railroads can adequately address those issues, "there shouldn't really be any major challenges in being able to meet their business needs," he adds.

PrecisionHawk has worked with railroads in the past and will continue to do so, says Haun, although he declined to name specific clients.

"We work in several different industries, rail being one of them, and I believe it'll continue to be an important one," he says.