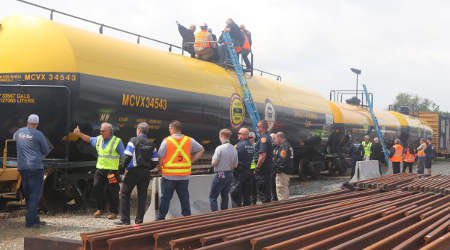 The training featured classroom and hands-on instruction inside a boxcar designed for educational purposes. Attendees learned how to operate hatches and valves, along with how to respond in the event of a tank-car problem, according to a press release issued by NYAR parent Anacostia Rail Holdings Co.

NYAR assembled a team of railway safety experts for the training exercises, which the railroad has conducted in the past.

"For us, it is critically important that the first responders in the markets we serve know what we are transporting and how we would work with together in case of a situation," said NYAR Chief Safety Compliance Officer Tom Leopold.

NYAR transports about 30,000 freight cars across Long Island each year. Less than 2 percent of those cars carry liquid propane gas to serve homes and businesses on the East End of Long Island, which are not served by natural gas utilities, NYAR officials said.