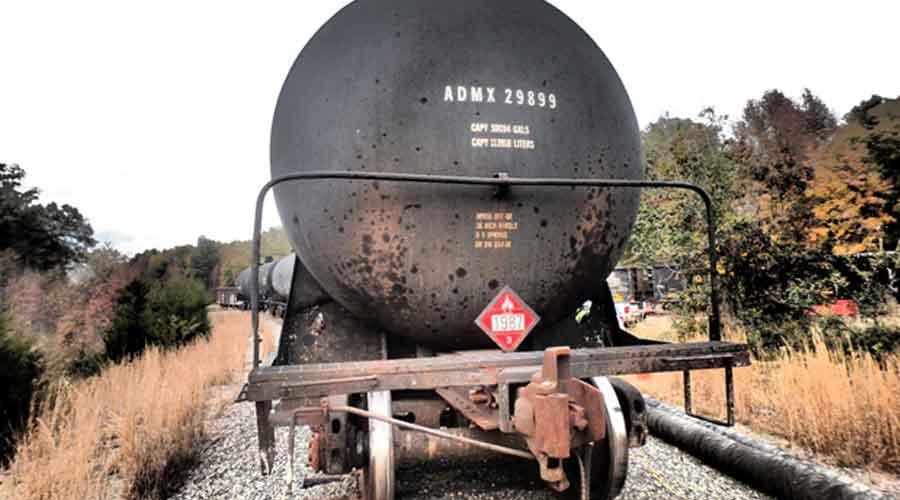 The National Transportation Safety Board (NTSB) determined earlier this week that an Archer Daniels Midland Co. rail tank car, while stationed at a CSX rail yard in Fredericksburg, Virginia, released denatured ethanol — a flammable hazardous material — from undetected cracks in the bottom of the tank car's shell.

The leaking tank car was the sixth car of a train that consisted of a buffer car loaded with steel and seven tank cars all fully loaded with denatured ethanol, NTSB officials said in a press release.

Other rail traffic on adjacent main tracks was significantly slowed because of the release, causing passenger train delays during peak traffic hours, they said. No one was injured in the incident.

In its report, the agency determined the undetected cracks resulted from overspeed, high-energy coupling events. Those events caused tank shell buckling, which led to the premature fatigue cracking at the inboard end of the cradle pad.

"This incident could have been mitigated if federal regulations were in place to limit high-energy coupling events that have the potential for causing damage to tank car structures that can lead to hazardous materials releases in transportation," said NTSB Chairman Robert Sumwalt.

Based on its investigative findings, the NTSB issued four new safety recommendations to the Federal Railroad Administration and the Pipeline and Hazardous Materials Safety Administration.

To read the full report, click on this link.