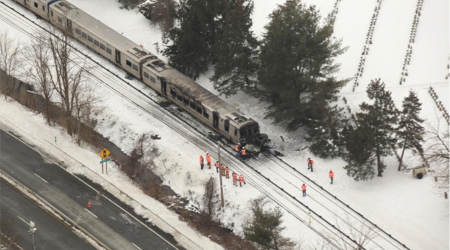 An SUV driver's actions are the probable cause of a fatal 2015 collision between the vehicle and an MTA Metro-North Railroad train at a grade crossing in Valhalla, New York, the National Transportation Safety Board (NTSB) announced yesterday.

The collision resulted in the deaths of the SUV driver and five passengers on the train in the Feb. 3, 2015, accident. The passengers were killed when 343 feet of the third rail, which powers the train, penetrated the floor of the first rail car and struck passengers, NTSB said in its final report on the accident investigation.

Investigators found that the SUV driver moved her vehicle into the path of oncoming Metro-North train No. 659. The grade crossing at Commerce Street was congested when the driver entered the crossing's boundary and stopped. The crossing's warning system activated properly and a gate came down, striking the rear of the SUV.

Witnesses told the investigators that the driver exited the vehicle, examined where the gate hit it, then got back inside and moved her vehicle onto the tracks and into the oncoming train's path.

The train was traveling at 51 mph when it hit the SUV, pushing it 665 feet down the track while detaching the third rail. Sparks, flaming debris and fuel caused a fire to start in the lead rail car.

Investigators also found that Metro-North's third rail system was not built to fail in a controlled manner or break away when subjected to overloaded conditions such as those involved in the accident. Furthermore, the use of Metro-North's current third rail system may increase the severity of other rail-car damage and serious injuries at grade-crossing accidents, board members said.

As a result of the accident, the NTSB recommended local officials assess the safety of grade crossings such as at Commerce Street.

The board also recommended that commuter railroads that use third-power systems at or near grade crossings should assess their safety.

"Sadly, all of the NTSB’s work in railroad and highway safety to date did not prevent this tragic accident,’" said NTSB Acting Chairman Robert Sumwalt in a press release. "But the recommendations we issued [yesterday] could help to avoid future tragedies."

Sumwalt also called on vehicle drivers to "think train and maintain or improve their situational awareness" when they see railroad tracks and come upon grade crossings.

Investigators ruled out the use of personal electronic devices or drugs and alcohol by both the SUV driver and train engineer involved in the Metro-North accident.