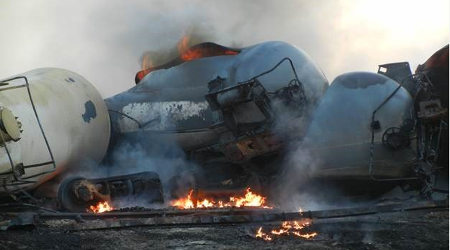 The National Transportation Safety Board (NTSB) yesterday determined that a broken axle set off a series of actions that resulted in a BNSF Railway Co. train accident in which 476,000 gallons of crude oil spilled and ignited near Casselton, N.D., in late 2013.

The incident occurred Dec. 30, 2013, and involved a crude-oil train and a grain train. The board found that the chain of events for the accident began when the grain train derailed because of a broken axle on one of its cars. The second train, which was carrying crude oil on an adjacent track, was unable to stop in time before colliding with the derailed grain-train's cars, NTSB officials said in a press release.

The oil spilled from 18 of the 20 derailed DOT-111 tank cars, formed pools and caught fire. Other derailed tank cars eventually ruptured as the heat from the fire weakened the tank steel and increased the internal pressure until oil vapor erupted into fire balls.

Also yesterday, the board released this YouTube video of the accident.

There were no fatalities or serious injuries as a result of the accident. Nearly 1,500 people were evacuated from nearby homes, however, NTSB officials said.

NTSB investigators found a void in the middle of the grain-train car's axle, which was used previously on another train car. In response to the board's urgent safety recommendation on the matter, the Association of American Railroads has moved to require testing of secondhand-use axles.

The accident also raised additional concerns about the widely used DOT-111 cars. The NTSB has long had concerns about the cars, which have a "relatively thin" 7/16-inch shell thickness, are not puncture-resistant and lack thermal protection as well as top and bottom fittings protection. The board yesterday reiterated its call for quickly phasing out DOT-111 tank cars.

Since the accident, Congress and the U.S. Department of Transportation have established requirements for the new, stronger DOT-117 tank car to replace the DOT-111 and its variants. The deadline for replacing the tank cars and its variants extends to 2029, however.

Although relatively few DOT-111s remain in crude-oil service, a vast fleet of them continues in service for ethanol and other flammable liquids, the board said.

"The fact remains that trains carrying flammable liquids in DOT-111 tank cars continue to roll through America's towns and cities," said NTSB Chairman Christopher Hart. "Progress toward removing or retrofitting DOT-111s has been too slow."

As part of its investigation into the accident, the NTSB also studied advanced brake systems. While their use in this instance would not have prevented the accident, "it may have mitigated the damage," NTSB board members said.

"In other scenarios, advanced brake systems have the potential to prevent train accidents altogether," they added.

Among its recommendations following the accident, the board suggested studying the use of additional "buffer" cars between locomotives and cars carrying hazardous materials to protect crews. The oil train in the Casselton accident had one buffer car between the locomotives and the cars carrying crude oil.

The NTSB's final report on the accident will be available later on ntsb.gov.