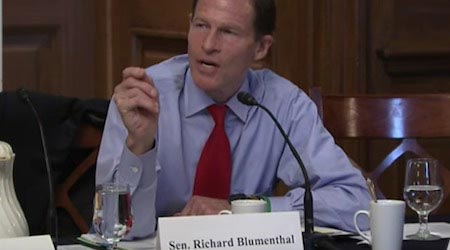 In a Nov. 15 letter, Blumenthal urged Feinberg to ensure that railroads have concrete plans in place to complete the implementation of positive train control (PTC) by 2018.

He also asked Feinberg to take immediate action on remaining safety provisions in the FAST Act, such as improving inspection practices on commuter railroads and requiring inward- and outward-facing cameras on all passenger trains.

Moreover, there are mandates in the 2008 rail safety law that have yet to be finalized, Blumenthal noted. Those include requiring railroads to have plans to address worker fatigue.

The senator also called on Feinberg to advance the use of close-call reporting systems and finalize a "sensible rule" requiring two-person crews. The latter measure has been opposed by rail industry associations.

"There is tremendous opportunity for action in the time you have left, so I urge you to take all steps possible to keep our rail system from reverting to the dangerous, deadly network of days past," Blumenthal wrote.