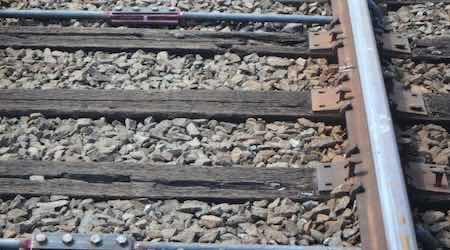 Washington Metropolitan Area Transit Authority (WMATA) crews more than a year ago uncovered faulty crossties that caused a derailment this summer, the National Transportation Safety Board (NTSB) announced in a report released yesterday.

The July 29 derailment occurred as a WMATA Silver Line train traversed a crossover in the East Falls Church interlocking in Virginia. Sixty-three passengers were onboard the six-car train; three reported injuries, including one who was hospitalized.

In reviewing the transit agency's monthly switch inspection reports between January 2015 and July 2016, NTSB investigators found that all reports for the crossover involved in the derailment documented a defective condition of 15 deteriorating ties.

What's more, of the 18 total ties in the track near the derailment, 16 were not in compliance with WMATA and Federal Railroad Administration (FRA) track safety standards, resulting in about 400 inches of unsupported rail.

The deteriorated tie condition allowed for a dynamic track gauge measurement of 59 inches. WMATA standards require tracks with a gauge over 57 1/4 inches to be removed from service, NTSB officials said.

The NTSB pinned the accident's cause on the wide track gauge condition that resulted from the sustained use of deteriorating wooden ties. The continued use of flawed ties, in turn, stemmed from WMATA's "ineffective inspection and maintenance practices and inadequate safety oversight," NTSB officials said in its report.

"Unlike the FRA, the FTA cannot issue civil penalties, individual liability penalties, compliance orders, or emergency orders," NTSB officials said. "The only tools available to the FTA are issuing safety directives and directing or withholding funds."

The board has long asked that the FRA take direct safety oversight of WMATA's rail system instead of the FTA.

In response to the NTSB's findings, WMATA officials said in a prepared statement that the agency's preventive maintenance program addresses many issues raised in the report. In addition, WMATA increased inspections of interlockings in the wake of the July 29 derailment.

The agency also has engaged and embedded six FRA-trained track inspectors to improve inspection processes and provide refresher training courses; contracted outside experts to survey all system track conditions; and is in the process of rewriting its track inspection manual.

WMATA's own investigation is wrapping up soon, agency officials said, noting that they expect to brief the WMATA board on their findings Dec. 15.