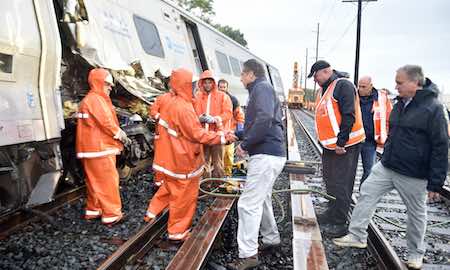 The incident occurred when a maintenance car and a 12-car passenger train sideswiped one another, which caused three of the passenger cars to derail, local media reported. Thirty-three people were injured, according to The New York Times.

The work vehicle appeared to be "violating the space" of the passenger train, but officials weren't sure why, New York Gov. Andrew Cuomo told reporters at a Sunday morning briefing.

After the derailment, crews used a crane to re-rail the train to remove it from the site. Crews repaired the damaged track and conducted safety inspections and tests, according to a press release issued by Cuomo's office.