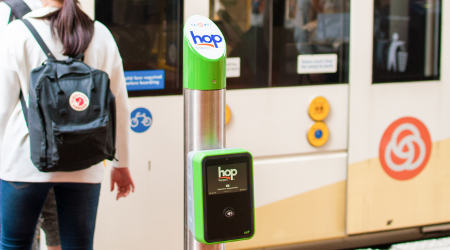 Riders can use a smartphone and a mobile wallet app with a linked credit or debit card to purchase fares on TriMet's rail and bus services, as well as on the Portland Streetcar.

In addition, if riders tap their phones for two distinct trips that are more than 2.5 hours apart in the same service day, they'll receive a day pass. That means any remaining rides for the day are free, TriMet officials said in a press release.

TriMet riders still are required to provide proof of payment. The agency's fare inspectors have new equipment to scan a Hop card or phone to determine whether a fare is valid.

Since 2014, TriMet and partners have been developing the $34 million Hop Fastpass system, which is expected to reduce fare evasion and cost associated with ticket vending machines, cash purchases and collection processing. The agency's partners include CH2M, moovel, INIT, Wells Fargo Merchant Services, Ready Credit and The Brigade.