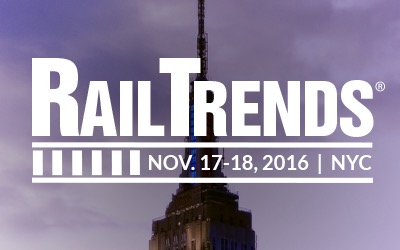 RailTrends® 2016 has announced its final speakers and presentations for this year's event, which will be held Nov. 17-18 at the W Hotel in New York City.

Presented by Progressive Railroading, RailTrends is the leading conference in the railway industry.

Moorman, the former chairman and chief executive officer of Norfolk Southern Corp., will speak at 9:45 a.m. on Nov. 17.

Amtrak's board appointed Moorman president and chief executive officer effective Sept. 1. He is the 10th executive to lead Amtrak since it began operation in 1971.

Prior to his appointment at Amtrak, he spent four decades at NS and its predecessor, Southern Railway. Moorman retired as NS chair and CEO in 2015.

To learn more about this year's RailTrends agenda, check out the RailTrends website. To register, click here.