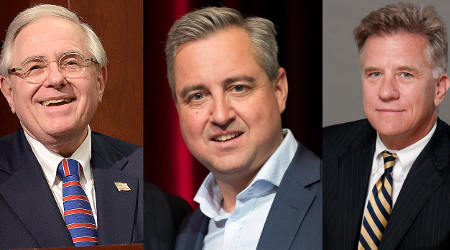 Batory is administrator of the Federal Railroad Administration; Brazeau is president and chief executive officer of the Railway Association of Canada (RAC); and Gilbertson is president and CEO of Anacostia Rail Holdings Co.

President Donald Trump nominated Batory to head the Federal Railroad Administration in July 2017; Batory was confirmed by the U.S. Senate in February. He has more than 45 years of experience serving the rail industry, including as president and chief operating officer of Conrail, from which he retired in 2017.

Brazeau, who began his service as RAC's top executive in July, has more than 20 years of transportation industry association experience. From 1995 to 2015, he served as president and CEO of the Automotive Industries Association of Canada. From May 2015 to July, he was vice president of sales and marketing at Uni-Select.

Meanwhile, Gilbertson will be representing the American Short Line and Regional Railroad Association (ASLRRA) when he speaks at RailTrends. He is past chairman of the Regional Railroads of America, the Surface Transportation Board's Railroad Shipper Transportation Advisory Council and the Hill Reference Library. As president and CEO of Anacostia Rail, he also serves as non-executive chairman of the Chicago South Shore & South Bend Railroad, the Louisville & Indiana Railroad, Northern Lines Railway and Pacific Harbor Line.

And for more information about the RailTrends 2018 agenda, check out this column by Progressive Railroading Editor Pat Foran.

Presented by Progressive Railroading, RailTrends 2018 will be held at the New York Marriott Marquis in New York City.