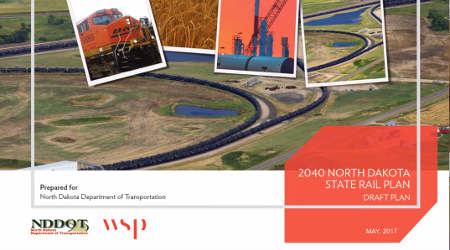 The North Dakota Department of Transportation (NDDOT) is seeking public comment through June 30 on the draft of its 2040 State Rail Plan.

NDDOT is writing the plan to guide the advancement of the rail system used by the state's freight shippers and rail passengers, NDDOT officials said in a press release.

The plan is an update to the State Rail Plan completed in 2007.

NDDOT provides an assessment of the rail system and offers recommendations for policies, programs, processes and projects that would improve rail safety and service. Input from rail stakeholders and the public was sought in the plan's preparation.

"The state continues to serve as the nation's largest originator of agricultural products and, until the crash in oil prices, had become the largest origin of crude oil shipped by rail," the report states. "Situated on key trade corridors linking the Midwest to the Pacific Northwest — as well as the BNSF Mid-Continent north-south corridor —
North Dakota is a major producer of products typically carried by rail."

Between 2002 and 2015, freight tonnage increased to 270 million tons from 170.6 million tons, representing an average annual increase of 5.8 percent, according to the state. Most of the growth was attributed to the rise in crude-oil production and agricultural shipments, according to NDDOT.

Rail traffic over that period rose to 21 percent from 12 percent. Although trucking also grew and remained the dominant mode, its share of traffic decreased "considerably," the plan stated.