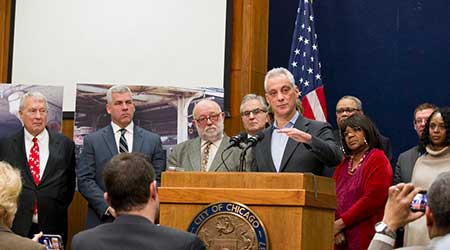 Chicago Mayor Rahm Emanuel and a group of suburban mayors yesterday called for a 20 cent to 30 cent per gallon increase in the state's gas tax to fund a major statewide bill calling for critical investments in transportation infrastructure.

The state's gas tax has been flat since 1990. Illinois has not passed a statewide capital bill since 2009.

"For Illinois to maintain its status as the transportation hub of the nation, we need to make major infrastructure investments to support our transportation systems," said Emanuel in a press release.

In addition to critical funding to replace aging roads and bridges, sustained and flexible revenue is needed to flow directly to public transit, the mayor said.

"As the backbone of our larger transportation network and a stimulator of economic development, transit needs a dedicated, reliable revenue source so that we can continue to modernize and grow the system," he said.

According to the Chicago Metropolitan Agency for Planning (CMAP), the region needs $24 billion in added revenue through 2050 to maintain the current system, without addressing the backlog. In addition, CMAP estimates that another $32 billion is needed to improve the condition, enhance and expand the current system. Decades of under-investment have created a significant backlog of projects to reach a state of good repair, Chicago city officials said.

A 20- to 30-cent increase in the gas tax would be a "reasonable" place to start to raise funding for infrastructure needs, city officials said. Federal and state dollars to support transportation investment have not kept pace with costs or inflation. Recent signals from Washington, D.C., point to a growing reliance on state and local funds to pay for infrastructure, they added.

The proposed capital bill is based on five principles:
• sustainable funding to create reliable, stable revenue streams that are not speculative or inadequate;
• multimodal transportation across not only across the region’s road network, but also across the transit, bicycle, and pedestrian networks;
• return on investment ensuring that investments reflect where the funding comes from;
• performance, ensuring vendors are held accountable for delivering; and
• benefits-based to reflect all transportation users' contribution to improving our infrastructure, no matter how they travel.