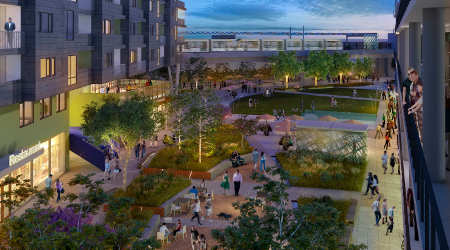 Known as "Ivy Station," the $350 million transit-oriented development will feature 200 apartments, 55,000 square feet of ground-floor retail and restaurant space, a hotel and a 200,000-square-foot office building.

"The Ivy Station development is a great example of how a partnership between the public and private sectors can benefit the residents of our region," said Jacquelyn Dupont-Walker, a member of Metro's board. "We will keep looking for these types of projects to build transit-oriented communities to provide more options for getting around Los Angeles County."

The development is situated halfway between downtown Los Angeles and Santa Monica, California. Commercial builder and construction management company Bernards is serving as general contractor for Ivy Station, which is slated to open in early 2020.

In May 2016, Metro opened a 6.6-mile light-rail extension of the Expo Line. Before the extension opened, the Culver City Station served as the line's terminus.