The North Carolina Department of Transportation (NCDOT) late last week announced that it's now halfway through the construction phase of the Piedmont Improvement Program, which is aimed at modernizing the state's rail infrastructure.

Along with the announcement, the department released a video showing railroad projects being completed along the Raleigh-Charlotte corridor. 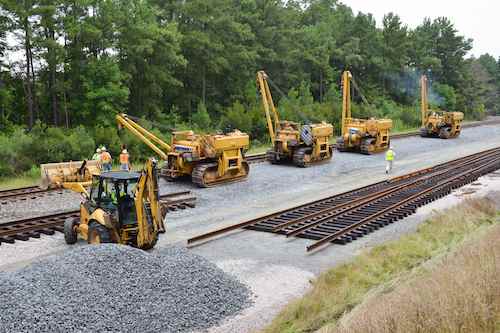 Photo: North Carolina Department of Transportation
The Piedmont program calls for a slew of rail improvements, such as adding 31 miles of parallel track to serve both freight and passenger trains; closing 38 public and private grade crossings; and renovating train stations in Burlington, Cary, High Point and Kannapolis. NCDOT also will build 12 roadway bridges to carry traffic over or under tracks.

"Since all trains use all tracks, these improvements will ensure more opportunities for businesses and our freight partners," said NCDOT Rail Director Paul Worley. "Safety and efficiency on the tracks allow freight railroads to get more goods to communities in our state to bring about job growth and economic development."

To complete the work, NCDOT is partnering with the North Carolina Railroad Co., Norfolk Southern Railway and CSX. The projects are largely funded through a $546.5 million federal grant.