The Pokemon Go trend: What (if anything) it means for railroaders 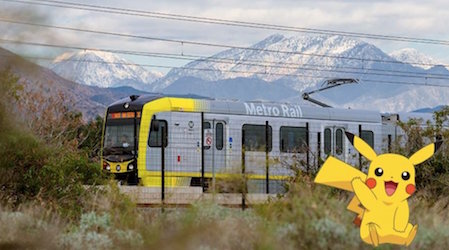 L.A. Metro has created a Twitter handle to provide updates on Pokemon Go.

Perhaps you're wandering your neighborhood trying to "catch 'em all." Or you're hearing stories about your coworkers or family members doing just that. Whatever the case may be, Pokemon Go most likely has infiltrated your personal or professional life in some fashion.

Released this month, the "augmented reality" game requires players to walk around their environments to capture virtual creatures known as Pokemon. It also involves checking in at "Pokestops" to gather equipment needed for the game, such as Pokeballs for catching the creatures. Additionally, players can stop at "gyms," where they train and battle Pokemon.

These gyms and Pokestops correspond to real-life places, including shops, restaurants and parks.

For those on the transit side of rail, this presents an opportunity to encourage ridership. The Los Angeles County Metropolitan Area Transportation Authority (Metro), for instance, has happily hopped on the Pokemon Go trend. On July 12, the agency put out a press release notifying riders that several of its rail stations serve as gyms or Pokestops.

In addition, Metro created a Twitter handle dedicated to updates about the game.

"For those of you who aren’t too keen on walking long distances, Metro buses and trains are a good traffic-beating option with many stations near the type of community gathering places favored by the game," agency officials said in the release.

"Unfortunately, illegal trespass on railroad tracks and property happens every day; even before the Pokémon Go craze hit, fatalities from this dangerous behavior have been increasing in recent years," wrote Operations Lifesaver Inc. spokeswoman Libby Rector Snipe in a blog post, noting that the game may put people at risk if they end up near train tracks.

Freight railroads, too, are urging players to use caution while playing the game. On Facebook, Union Pacific Railroad advised Pokemon GO players to stay away from tracks while trying to catch Pokemon. And the Federal Railroad Administration on July 22 tweeted a similar message.

In addition, a local Fox affiliate in Tulsa, Okla., reported that BNSF Railway Co. is having issues with people walking into one of its yards because it had been designated as a Pokestop. As a result, the railroad has increased security at the yard and plans to issue trespassing notices for players that have wandered in.

"Although Pokemon Go is breaking new ground and is the biggest mobile game in U.S. history, one thing remains the same: Tracks are for trains," the Association of American Railroads said in a Facebook post.