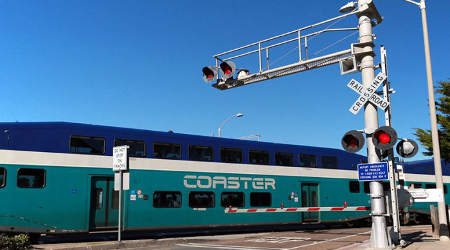 The North County Transit District (NCTD) of San Diego announced yesterday that it's on track to fully implement its positive train control (PTC) system by the Dec. 31 deadline.

The FRA also conditionally certified the San Diego-area commuter railroad's PTC system. NCTD is one of 10 railroads in the United States to receive such an approval, NCTD officials said in a press release.

Conditional approval of the safety plan enables NCTD to begin interoperability testing, which will allow other railroads that operate on NCTD-owned track to test their own PTC systems for integration with NCTD's.

These tenant rail partners — which include Amtrak, BNSF Railway Co., Metrolink and Pacific Sun Railroad — must be able to seamlessly communicate and operate across systems, NCTD officials said.

"We at NCTD, along with Herzog staff, have worked diligently to integrate this system into our current equipment and we are looking forward to testing the system with our partner rail operators who utilize our track,” said Eric Roe, NCTD's deputy chief operations officer of rail.

Since 2012, Herzog has worked on the design, installation and implementation of NCTD's PTC system. To date, the company has performed all the required activities to ensure NCTD meets the federal mandate, agency officials said.

In January 2017, NCTD filed an application with the FRA for a PTC revenue service demonstration.

Railroads have until Dec. 31 to implement PTC or apply for a deadline extension.

Earlier this month, FRA Administrator Ronald Batory informed the House Subcomittee on Railroads, Pipelines and Hazardous Materials that nine passenger railroads have been determined to be "most at risk" of failing to qualify for a deadline extension.