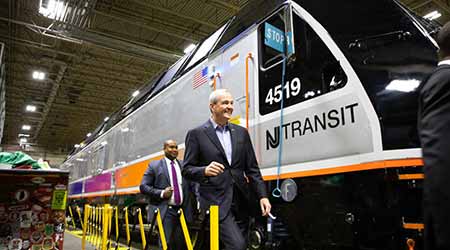 Criteria for meeting the FRA's Dec. 31 deadline included installation of equipment on locomotives and cab control cars; installation of 326 miles of wayside equipment including radios, transponders and poles; and initiation of PTC testing and employee training.

By meeting those requirements, the agency will avoid paying federal penalties. It also means NJ Transit may apply for an alternative schedule to have PTC fully operational by Dec. 31, 2020, Murphy said in a press release.

"Make no mistake. There's still a lot of work left to do on PTC, but this is a major step forward as we continue to rebuild our mass transit system," the governor said.

After years of being behind schedule in PTC implementation, meeting the FRA's 2018 PTC deadline shows that safety is "priority No. 1" at NJ Transit, said U.S. Rep. Bill Pascrell (D-N.J.), who worked to secure a federal grant for PTC installation last year.

In October, Murphy released an audit of NJ Transit as part of a plan to overhaul the beleaguered transit agency. The audit called for leadership, operational and financial changes. Murphy signed an executive order mandating the full-scale audit in January, shortly after he took over as governor.