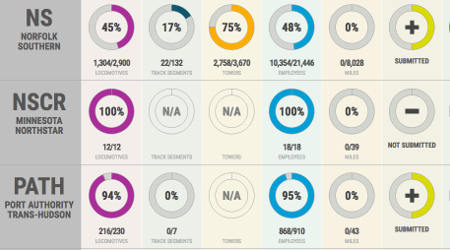 As of Dec. 31, 2016, freight railroads had positive train control (PTC) active on 16 percent of tracks required to be equipped, up from 12 percent in third-quarter 2016, the Federal Railroad Administration (FRA) announced today.

The report was the FRA's latest update on the industry's PTC implementation. Based on railroad-submitted quarterly data, the latest report shows that freight railroads are continuing to make "consistent progress," while the passenger-rail industry is progressing more slowly, according to an FRA press release.

Passenger railroads had PTC active in the fourth quarter on 24 percent of tracks required to be equipped, up from 23 percent in the third quarter.

Congress requires Class I railroads, intercity passenger and commuter railroads to implement PTC systems by Dec. 31, 2018. Only if some key implementation and installation milestones are met may railroads be eligible to obtain an extension to no later than Dec. 31, 2020, subject to the U.S. transportation secretary's approval.