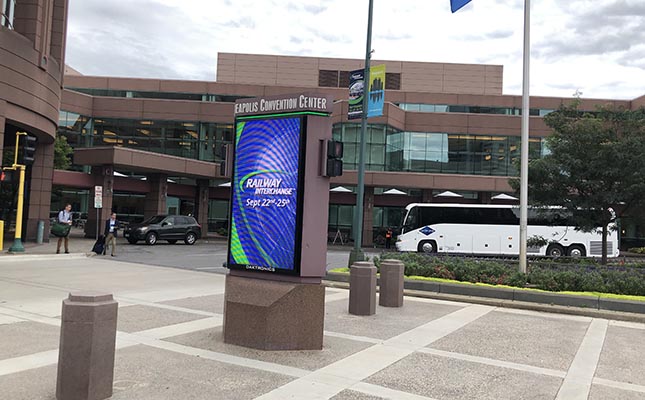 The event was held at the Minneapolis Convention Center. More than 8,000 attendees were on hand, while more than 600 exhibitors displayed their wares or touted their services in the exhibit hall, and more than 50 companies showcased their equipment at the outdoor exhibits. 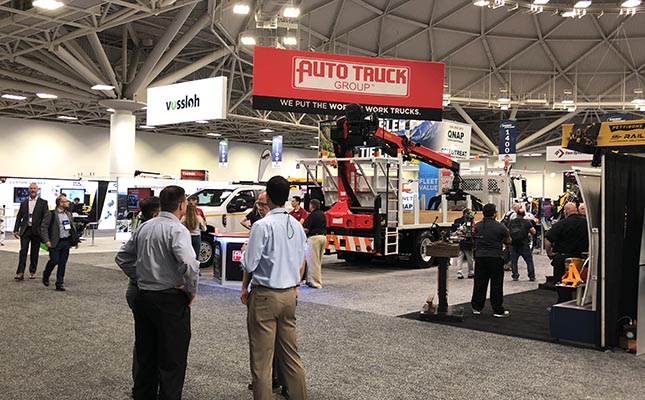 Indoor exhibits opened at 1 p.m. on Sept. 22 and immediately began to draw attendees. All 600-plus exhibits were housed in the exceptionally large hall, which could accommodate machinery of all sizes. 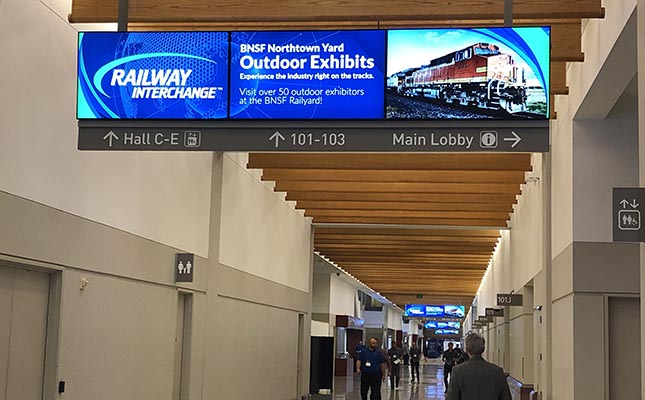 The outdoor exhibits opened at noon on Sept. 22. A sign in the convention center directed attendees to buses that shuttled them to the site — BNSF Railway Co.'s Northtown Yard in Minneapolis, about five miles away. 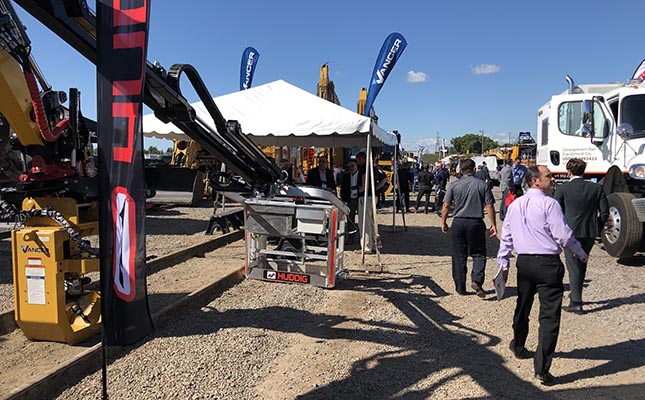 Hosted by RSI and REMSA, the outdoor exhibits featured both on- and off-track equipment. Thousands of attendees viewed the displays Sept. 22-24. 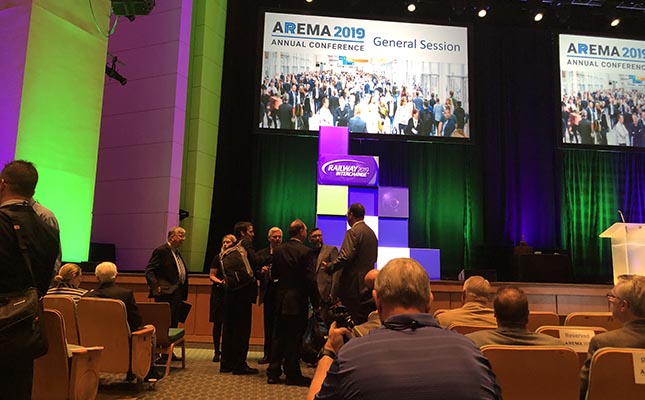 The first AREMA general session began at 7:15 a.m. Sept. 23 with a safety briefing and an address from AREMA President James Kessler, the vice president of engineering for North Carolina Railroad Co. 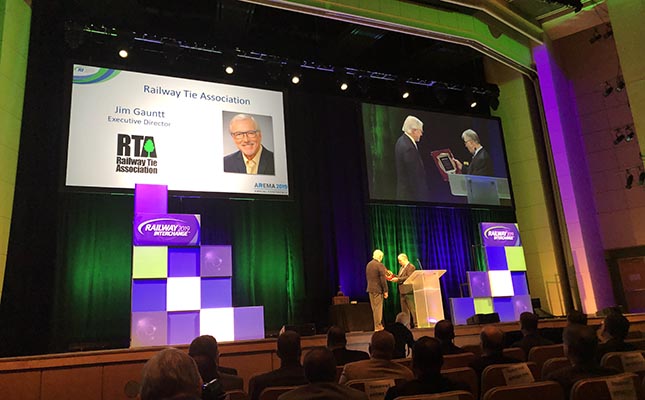 During the session, AREMA recognized the long-time contributions of Railway Tie Association (RTA) Executive Director James Gauntt, who plans to retire at 2019's end and then serve in a consulting role. Gauntt has led RTA for 25 years. 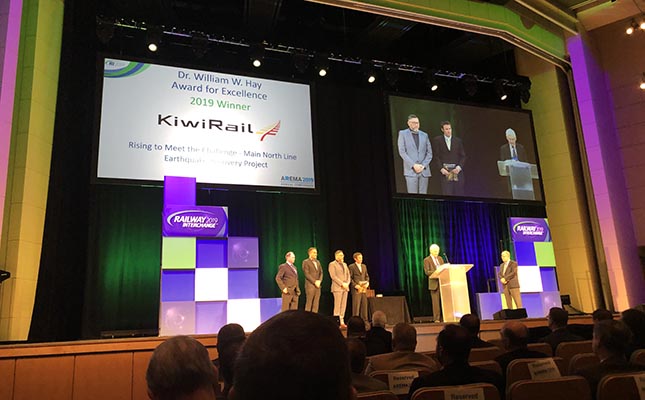 AREMA leaders also bestowed the annual Dr. William W. Hay Award for Excellence. The 2019 winner? KiwiRail, for its earthquake recovery project in New Zealand, which was a massive undertaking. 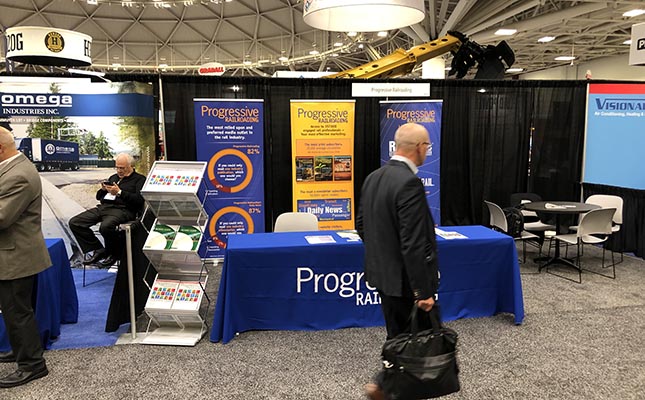 Progressive Railroading maintained a booth at the event and the magazine's staff members participated in many of the activities and presentations. 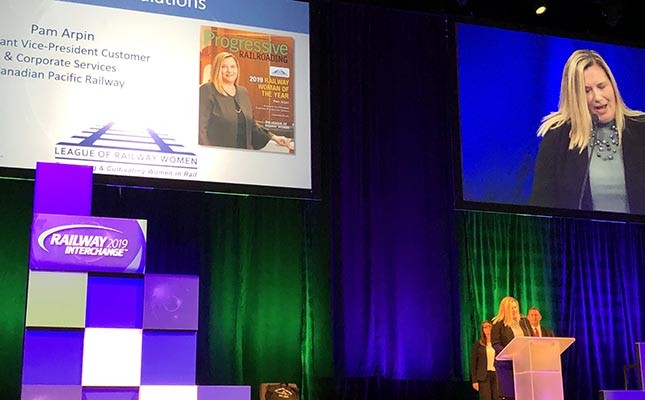 In the latter stages of the general session, League of Railway Women (LRW) President Tanis Peterson and Progressive Railroading Publisher Kirk Bastyr (in the background) presented the 2019 Railway Woman of the Year award to Canadian Pacific AVP of Customer and Corporate Services Pam Arpin (at the lectern). Progressive Railroading has co-sponsored the award for the past 17 years. 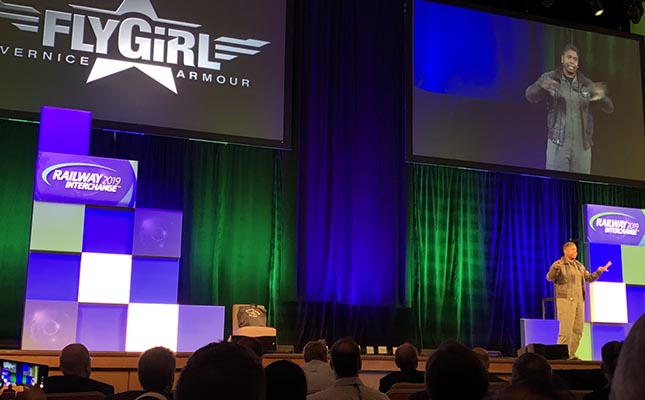 A highlight of the general session was a keynote address from Vernice “FlyGirl” Armour, the United States’ first African American female combat pilot. During her energetic presentation, she encouraged attendees to “get gutsy and live gutsy” in order to succeed in life. 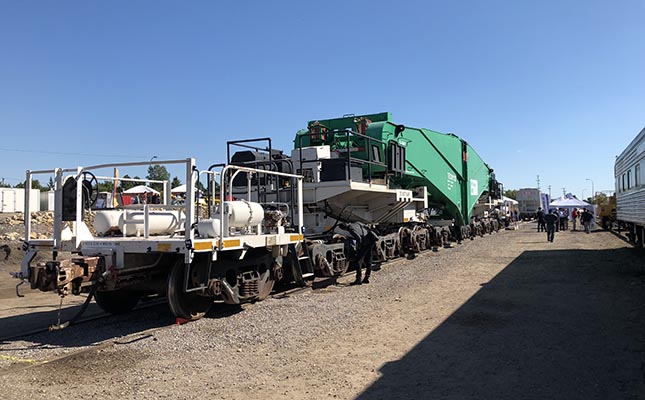 The outdoor exhibits included many extremely large pieces of equipment. 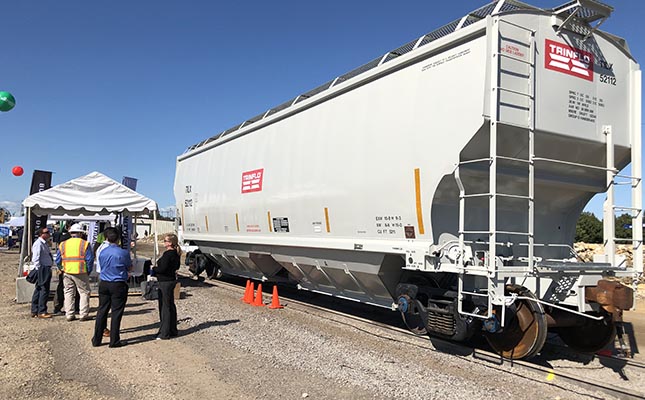 Some recently introduced rail cars also were on display, including this TrinityRail hopper. 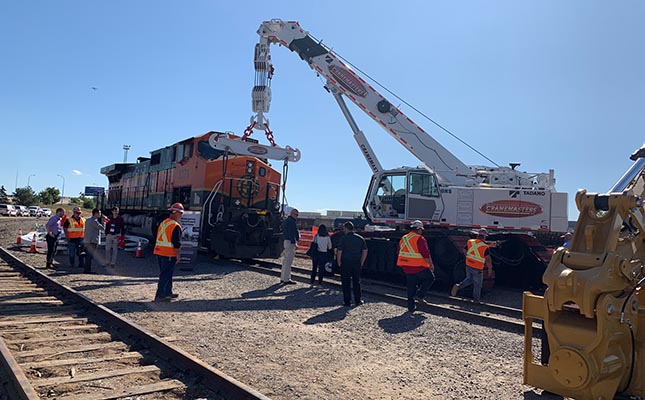 Some attendees watched a demonstration of equipment used to rerail a locomotive and rail cars after a derailment. 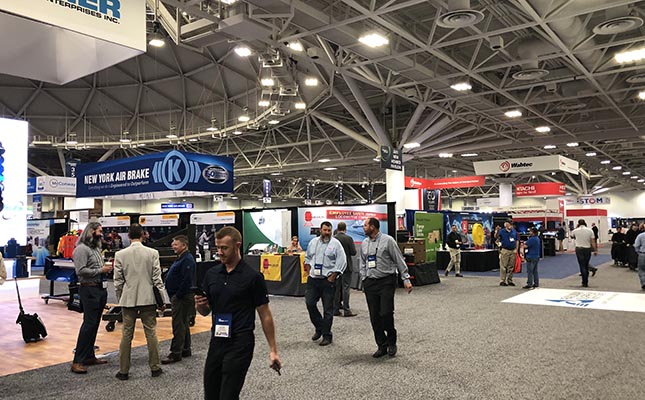 The indoor exhibit hall was bustling on Sept. 23. The long day of exhibiting included breakfast, lunch and a reception for attendees, as well as various educational sessions at a learning lab stationed in the hall. 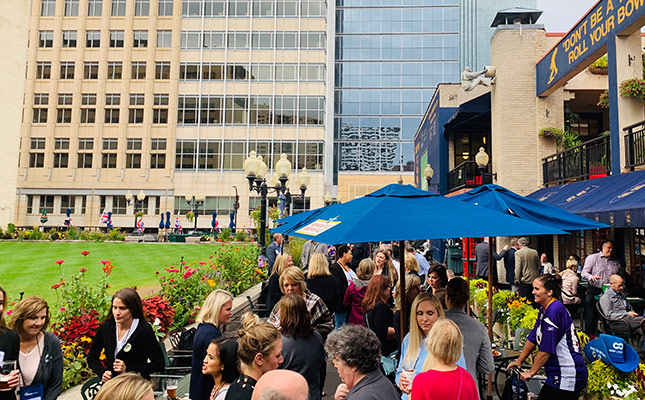 LRW members gathered at Brit's Pub in Minneapolis Sept. 22 for a networking reception. 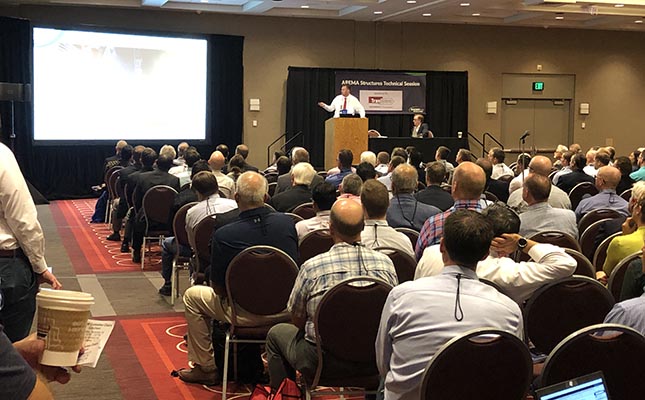 Many of the more than three dozen breakout sessions presented by AREMA on Sept. 23 and 24 were heavily attended. 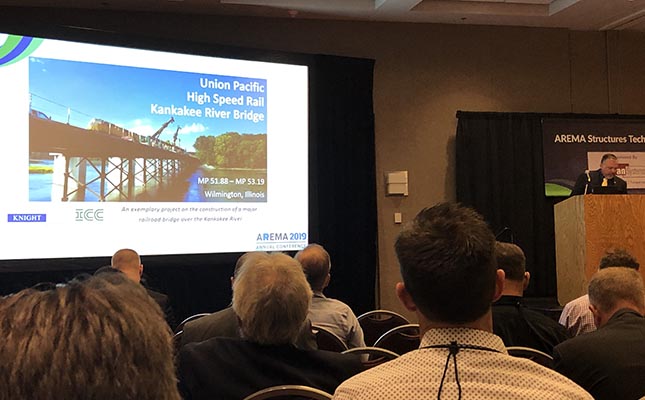 One breakout session reviewed the construction of a UP bridge over the Kankakee River in Wilmington, Illinois, about 52 miles from Chicago. Part of a high-speed rail project between Joliet and St. Louis, the bridge work involved the replacement of three aging structures and upgrades to three grade crossings. 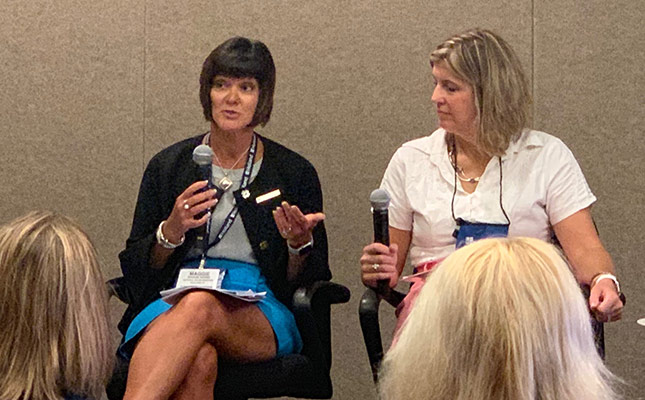 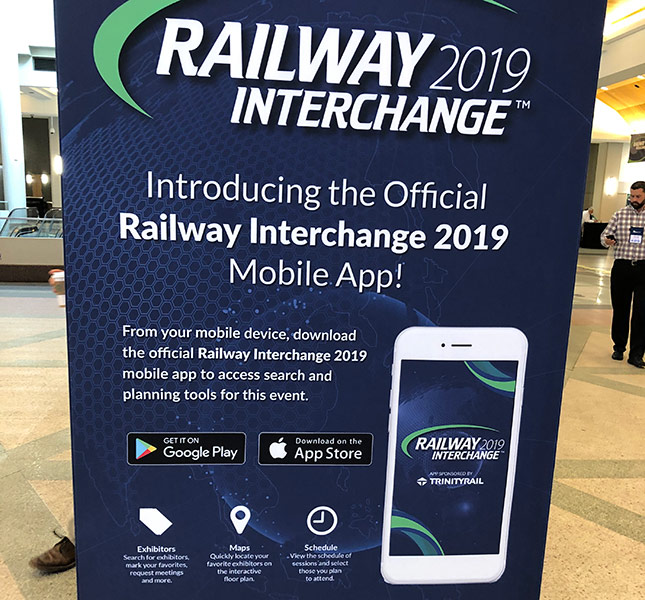 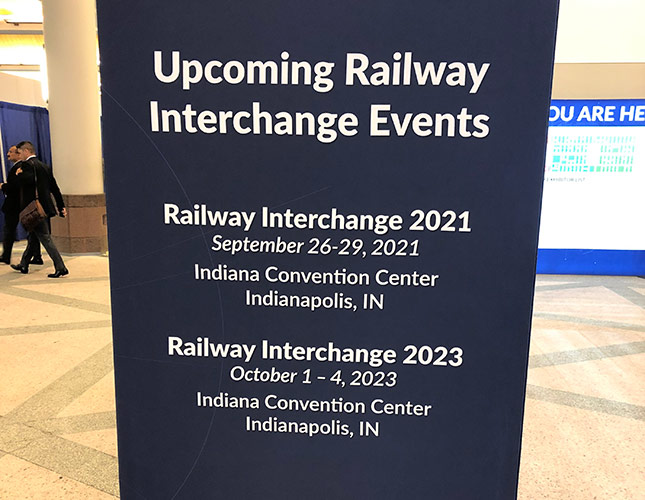 Railway Interchange will return to Indianapolis in 2021, then be held in that city again in 2023. The event usually alternates between Minneapolis and Indianapolis every two years.