Aylward is the organization's seventh permanent director, and the first woman to hold the position, according to the U.S. Department of Transportation's (USDOT) Assistant Secretary for Research and Technology Greg Winfree. 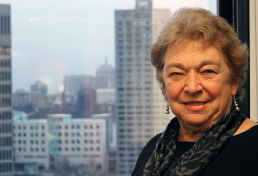 She has more than 20 years of service at Volpe, during which time she made "substantial contributions" to USDOT's priorities. She has led a research and technology staff of 490 analysts, economists, engineers, planners, scientists, and system developers, Winfree wrote in the USDOT's "Fastlane" blog.

In addition, Aylward has co-led Volpe's efforts on priorities such as the first National Freight Strategic Plan. She also has strengthened relationships with USDOT and other partners to help increase the value of Volpe's research portfolio by nearly 20 percent over the past five years, according to Winfree.

Prior to joining Volpe, Aylward worked for the Massachusetts Port Authority from 1976 to 1993, including 10 years as director of the Port of Boston. She was also the first woman elected to chair the American Association of Port Authorities.