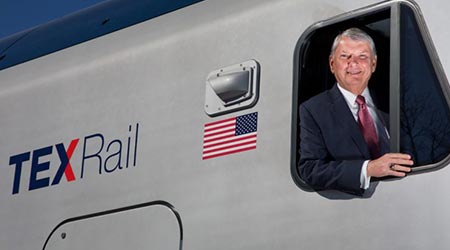 Ballard has served the past 46 years as a general manager, CEO or president of transit systems in both public and private sectors, Trinity Metro officials said in a press release. He began his career as a brakeman and trainman on the Boston and Maine Railroad, and was a bus operator and supervisor of public transit before becoming one of the nation’s youngest transit system GMs.

“Without Paul, the staff he assembled and our dedicated board members, there would be no TEXRail,” said Trinity Metro Chairman Scott Mahaffey. “We’re on track, on time and under budget. Tell me how many government projects can claim that.”

TEXRail undoubtedly has been the biggest challenge of his career, said Ballard.

“[But] this is the perfect time for me to step back and look toward doing a little consulting and traveling the rails around the world,” he said.