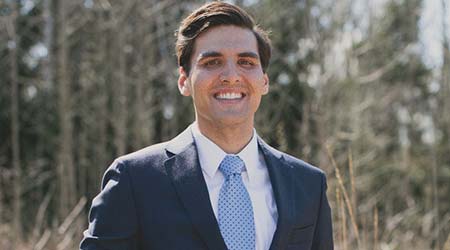 The Surface Transportation Board (STB) has designated Patrick Fuchs as vice chairman. The vice chairmanship rotates among board members each year.

Fuchs was sworn in last month as an STB member. Prior to that, he served as a senior professional staff member working on surface transportation and maritime issues for the Senate Committee on Commerce, Science and Transportation under Chairman John Thune (R-S.D.).

Fuchs played an integral role in developing and enacting major railroad legislation, including the first reauthorization of the STB since its creation in 1996 and the first passenger-rail reauthorization in more than seven years, according to the STB. He also worked on legislation aimed at improving rail project delivery, rail financing and hazardous materials safety.

Fuchs previously was a policy analyst and presidential management fellow at the Office of Management and Budget, where he managed railroad and maritime regulatory reviews, and worked on regulations pertaining to rail safety technology and railroad operating practices. His early career experience included stints at the U.S. Department of State, U.S. Government Accountability Office, and National Center for Freight and Infrastructure Research and Education.

Also last month, the STB swore in Martin Oberman as a member. A trial and appellate lawyer in Chicago for nearly 50 years, he was chairman of Metra from 2014 to 2016. Oberman also had a lengthy career in public service, including 12 years as a reform leader on Chicago's City Council.