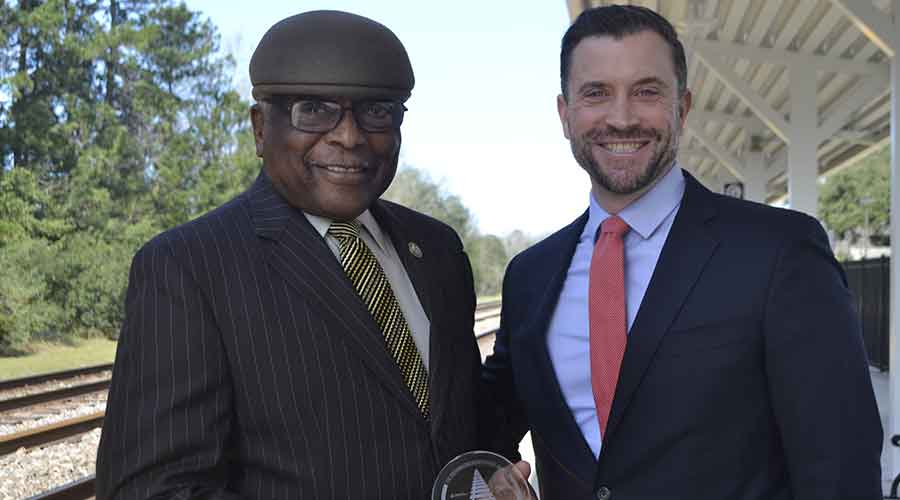 The Association of American Railroads (AAR) and GoRail on Tuesday presented U.S. Rep. James Clyburn (D-S.C.) with the Railroad Achievement Award in his district.

The award honors Clyburn for his longstanding leadership on surface transportation issues, including matters that affect freight and passenger railroads in South Carolina and across the nation, AAR officials said in a press release.

Eleven railroads in South Carolina operate across 2,500 miles of track, collectively terminating 27.7 million tons of freight in the state in 2017 alone. Class Is CSX and Norfolk Southern Railway maintain a significant presence in Clyburn’s district and continue to work with transportation stakeholders to increase freight capacity at the Port of Charleston. Clyburn’s involvement has been paramount throughout, AAR officials said.

"Congressman Clyburn is one of the most effective leaders this generation has seen in advancing bipartisan policy, including every transportation bill of consequence for his nearly 20 years atop the Democratic caucus,” said AAR President and Chief Executive Officer Ian Jefferies.

Jefferies also praised Clyburn for his work on legislation that recognizes the need for a high-performing, integrated transportation network.

"This includes work on matters such as the Fixing America’s Surface Transportation (FAST) Act in 2015, the continued work on surface transportation reauthorization in this Congress and involvement in rail-specific matters, such as grant programs to improve highway-rail grade crossings," Jefferies said.

The Railroad Achievement Award is given to members of Congress who have shown leadership on multimodal transportation policies that help ensure the vitality of railroads in the United States.

Last week, the Congressional Black Caucus, led by Clyburn and colleagues, issued principles for 21st century infrastructure, which include the need for resilient infrastructure and viable transportation options for people and freight across multiple modes — ideas that railroads fully embrace, AAR officials said.

Clyburn is the majority whip in the U.S. House.