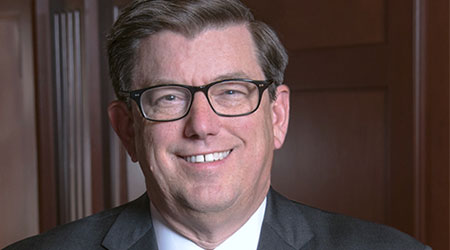 Progressive Railroading and RailTrends® have named Kansas City Southern President and Chief Executive Officer Patrick Ottensmeyer the 2019 recipient of the Railroad Innovator Award, which recognizes an individual's outstanding achievement in the rail industry.

KCS’s president since 2015 and CEO since 2016, Ottensmeyer has helmed the railroad during a pivotal stretch in its history.

“Pat has led KCS through the proverbial ‘interesting times’ — growth potential, operating challenges, hurricanes, trade wars, government interference and threats (on both sides of the border), civil disturbances — and all through it, he has transformed his railway into a growth leader, a technology leader and, soon, a precision scheduled railroad (PSR) leader, as well,” says independent transportation analyst Tony Hatch, program consultant for the annual RailTrends conference.

As chair of the U.S. Chamber of Commerce’s U.S.-Mexico Economic Council, Ottensmeyer ensures the rail industry has a voice at the table, engaging with public- and private-sector leaders to strengthen bilateral commercial ties. He also served as the U.S. chairman of the strategic trade initiatives working group of the U.S.-Mexico CEO Dialogue. Meanwhile, KCS has been nudging the innovation needle, embracing blockchain and all that next-gen positive train control might net.

And under Ottensmeyer’s watch, KCS is taking what Hatch calls “a bold view of PSR as a growth-driver of looking at change not to please the lowest common denominator (i.e., not just to close yards), but to achieve their credo, service begets growth.”

Before taking the railroad’s reins, Ottensmeyer served as KCS’s EVP of sales and marketing from 2008 to 2015, and as EVP and chief financial officer from 2006 to 2008. Prior to joining KCS, Ottensmeyer was EVP and CFO of Intranasal Therapeutics Inc. from 2000 to 2006. Before that, he was VP of finance and treasurer for Santa Fe Pacific Corp. and Burlington Northern Santa Fe Corp. (1993 to 1999).

Ottensmeyer will receive the award during RailTrends 2019, which will be held Nov. 21-22 at the New York Marriott Marquis in New York City. For more information, log onto RailTrends.com.