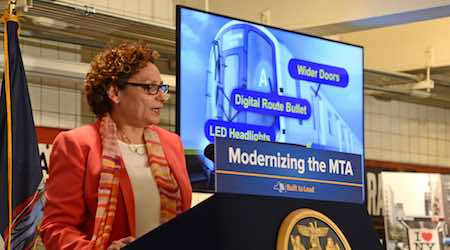 APTA Chairman Nathaniel Ford Sr. announced in a newsletter this week that MTA Managing Director Veronique "Ronnie" Hakim was elected May 5 to APTA's board, marking the return of MTA to the association's membership.

Also elected to the board is Maxine Wortham, chair of the Greater Peoria Mass Transit District in Illinois.

After the vote, Hakim "thanked the APTA leadership for strengthening the association, creating greater member value, and welcoming back the largest transit system in the nation," Ford wrote.

In April 2016, MTA's then-Chairman and Chief Executive Officer Thomas Prendergast sent a letter to APTA's then-CEO Michael Melaniphy indicating the MTA's frustrations with the association's lack of leadership in addressing the concerns of commuter railroads and "legacy" transit agencies, which represent the majority of APTA's membership.