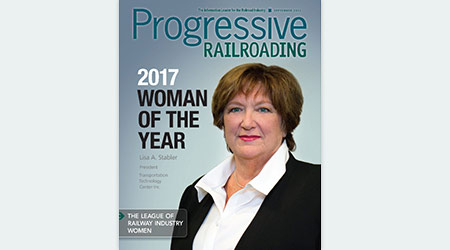 Stabler received the award at the general session of the Railway Interchange conference now underway in Indianapolis.

Co-sponsored by Progressive Railroading, the annual award recognizes a woman who demonstrates vision, initiative, creativity and guidance in a leadership role in the rail industry; is innovative, a problem-solver and overcomes challenges; and brings consistent excellence to her organization and community.

"Lisa Stabler is a gifted engineer who has been a rail industry leader throughout her career," said LRIW President Jodi Heldt in a press release.

Stabler became president of the TTCI in 2011, after joining the organization in 2010 as vice president, operations and training. She previously was assistant vice president, quality and engineering for BNSF Railway Co., where she improved quality, advanced research and streamlined processes using the Six Sigma problem-solving method, LRIW officials said.

Stabler's contributions to the industry as TTCI president have affected railroading across the United States and around the world, LRIW officials said. The research and testing facility advances the science of railroading and works to improve operational safety and efficiency.

"Lisa commands attention and respect from the AAR board of Directors, the federal government, elected officials and the public at large," said Association of American Railroads President and Chief Executive Officer Edward Hamberger, in his nomination letter of Stabler for the award.

Stabler has received media attention for her expertise. In July, she was featured in a Today Show segment on train safety, demonstrating TTCI's groundbreaking research into rail wheel defect detection.