LRIW opens nominations for 'Outstanding Woman of the Year' 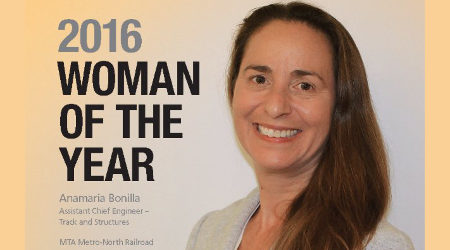 The League of Railway Industry Women (LRIW) is now accepting nominations for the 2017 Outstanding Woman of the Year Award, which is co-sponsored by Progressive Railroading.

For two decades, the LRIW has been recognizing women who have made significant contributions to the rail industry through leadership, dedication and vision. Women working in the North American rail industry are eligible to receive the award.

"Women contribute a great deal to the progression of the railroading industry," said LRIW President Jodi Heldt in a press release. "This award helps recognize their achievements and contributions before an audience of their peers."

This year's award will be presented at the Railway Interchange 2017 conference being held Sept. 17-20 in Indianapolis.

Nomination criteria and the official nomination form can be downloaded from the LRIW website until July 31.

"We all know a woman who goes the extra mile, helps make strategic decisions that propel the business forward, looks after the company's best interests, motivates and encourages staff and notably does so much more," said LRIW Awards Chair Sally Boven.