Canadian Pacific Chair Reardon to retire, Courville to lead board in 2019 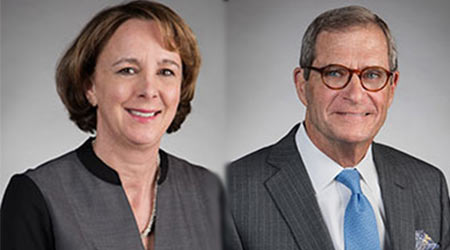 Canadian Pacific Chairman Andrew Reardon has notified CP that he will retire as board chairman at the company's annual meeting in May 2019. Board member Isabelle Courville has been designated as CP's next chair.

Reardon has been a director of CP since May 2013 and chairman since July 2015. During his time on the board, he has served on all its committees. Prior to assuming his role as board chairman in 2015, he chaired the Finance Committee.

Reardon has brought "extensive" experience to CP and its board in executive management, law, corporate governance and the rail industry, CP officials said in a press release.

A veteran of the railroad industry for over 40 years, Reardon served as president, chief executive officer and chairman of TTX Co. from 2001 to 2008.

"I am proud to have been associated with CP, its management and Board of Directors during a period of great growth and positive change," Reardon said. "I wish CP continued success going forward and have no doubt this group of world-class railroaders will continue to deliver."

When she succeeds Reardon, Courville will become the first woman to chair CP's board, which she joined in May 2013. She chaired the board's Audit Committee from 2014 to 2016 and since 2016 has chaired the Management, Resources and Compensation Committee.

"We will miss Andy after he steps down in May of 2019, and on behalf of the 13,000-strong CP family, we thank him for his service and dedication," said CP President and CEO Keith Creel. "Under Isabelle's direction, the board remains in good hands and we look forward to writing the next chapter of the CP story."