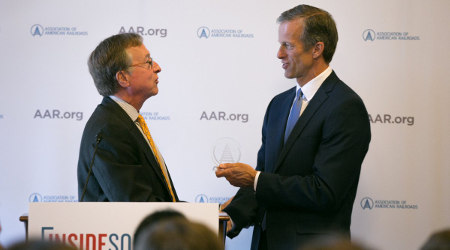 The senators were honored for their "consistent, bipartisan leadership on issues affecting U.S. railroads and the nation's rail network," according to an AAR press release.

Thune and Nelson were recognized in advance of a panel discussion in Washington, D.C., on the railroad industry's role in the U.S. economy. 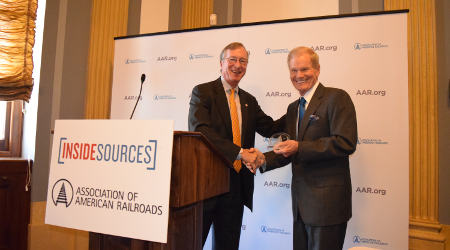 In the future, the award will be given periodically to other members of Congress who AAR and GoRail believe have shown leadership on policies that help ensure the railroad industry's place in the economy, officials from both organizations said.

"Communities all across America reap the benefits delivered by an innovative freight rail industry that invests more than 40 cents of every revenue dollar back into the nation's rail network," said GoRail President Russell McGurk. "Making this possible are sound public policies and elected leaders like Senators Thune and Nelson with the foresight to enact and protect those policies."

In his prepared remarks introducing the senators, Hamberger highlighted their role in a FAST Act measure that streamlines the environmental permitting process for rail infrastructure projects based on previously enacted reforms for highway and transit projects. Hamberger also praised the senators for their leadership in reauthorizing the Surface Transportation Board.