AAR's Hamberger to retire in early 2019 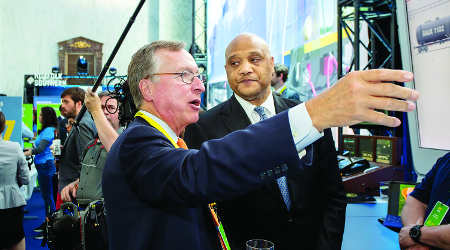 Sometime in early 2019, Ed Hamberger will no longer lead the major U.S. rail association he’s guided for 20 years. In May, he announced plans to retire next year as president and chief executive officer of the Association of American Railroads (AAR).

Hamberger is the longest-tenured leader of the 83-year-old association. He’s considered one of Washington, D.C.’s most effective and influential transportation policy advocates, and has testified before Congress more than 85 times. But he’s ready to turn the AAR’s reins over to a successor.

“It feels like it’s the right time to pass the baton,” says Hamberger, who turned 68 on Memorial Day.

An executive search is underway and the next leader likely will be appointed early next year. Hamberger promised the AAR’s board he’d continue to serve through first-quarter 2019 to help with the transition, he says.

Reflecting on his long career, Hamberger considers it a privilege to have helped freight railroads navigate various regulatory and economic hurdles, such as by lobbying for balanced regs that support continued rail infrastructure investments, and against longer and heavier trucks.

A career highlight: his and the AAR’s guidance in helping to form the Chicago Region Environmental and Transportation Efficiency (CREATE) program in 2003. That effort hinged on getting a dozen or so parties — including Class Is, short lines and several government entities — to agree to cooperate in Chicago, says Hamberger.

“I think CREATE is the poster child for public-private partnerships,” he says.

But Hamberger believes the crowning achievement under his watch occurred in 2001 shortly after 9/11. His weekly calls with railroad CEOs helped foster the creation of a four-point security management plan, a command center and more secure rail communications.

“From a ‘good for America’ standpoint, this is what I’m most proud of,” says Hamberger.

As for retirement, he isn’t sure what he’ll do when the time comes. There’s still a lot of work to finish first, Hamberger points out.

“I do expect to take advice and put my feet up and not jump at the first thing that comes along,” he says. “I’d like to concentrate on four-foot putts.”

Because of his many accomplishments as AAR leader, Progressive Railroading and RailTrends in late May named Hamberger the 2018 recipient of the Railroad Innovator Award, which recognizes an individual’s achievements in the rail industry.

The following three industry leaders noted some of those contributions and a few lasting impressions in a press release or email:

“Ed has been a forceful advocate for freight railroads and will leave behind a powerful legacy in Washington and in the industry.” — James Squires, Norfolk Southern Corp. chairman, president and CEO, and AAR chairman

“Ed has done his job with great humor, never taking himself too seriously, and with great humility, all the while never stooping to the partisan rancor that can divide many Washington players. A class act!” — Linda Bauer Darr, American Short Line and Regional Railroad Association president.