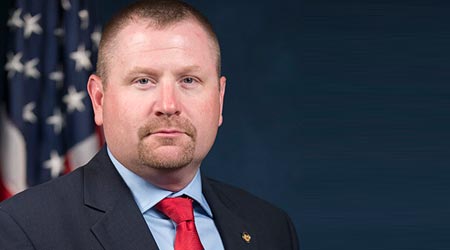 Job description: Gordon has been involved in railroading since 2000. In 2014, he joined the NTSB, where he participates in or leads investigations into high-profile rail accidents, then presents the findings to the board. He also conducts outreach for the NTSB and provides training and guidance to the rail industry.

Nominator’s quote: “During Mr. Gordon's years in the railroad industry, he continued to advance while keeping railroad safety as his core value. More importantly, Mr. Gordon shows tremendous character and ethics in every task or goal he is assigned.” — Georgetta Gregory, NTSB

How did you get into railroading?
After high school, I entered an electrical apprenticeship with the goal of becoming a licensed electrician. My father was a locomotive electrician in the diesel shops on the C&O Railroad. I saw how the railroad provided for my family and thought I would like to follow in his footsteps.

However, before completing the apprenticeship, I went to a hiring session for the CSX engineering department. After starting with CSX Transportation, I attended foreman training and track inspection training. I worked in the engineering department for five years and then transferred to the mechanical department where I went to carman school and became a qualified welder and rail-car inspector.

In 2007, I left the railroad and became a railroad safety inspector, first for the Commonwealth of Virginia and then the Federal Railroad Administration. I came to the NTSB from the FRA in 2014.

What inspires you?
My faith and my family inspire me. I have been blessed with a wonderful wife and two amazing children. I want to be sure that everything possible is done so that all railroad workers, rail transportation users and the public who encounter the railroad, go home to their families at the end of each day.

Tell us a little-known fact about you.
I enjoy cooking; it is my way to unwind after a long day. I have become so fond of cooking new things that I would like to open a small restaurant after my work in the industry is complete.

What do you enjoy doing when you’re not at the office?
I’m an outdoor guy. I love to hike, fish, kayak on the beautiful James River and snow ski in the mountains of the Virginias. Working outdoors is one of the unsung perks of railroading.

What advice would you share with a first-year railroader?
Take it all in. The industry is experiencing a big turnover and a lot of knowledge is going out the door. Learn as much as you can from your seasoned co-workers. You are the future of the railroad, and the backbone of America.

What would you say to convince someone to consider railroading as a career?
There is a reason that generations of Americans have been enamored with the railroad; we keep the country moving and you can be a part of that unique opportunity.

Michael Lefevre
Brightline (All Aboard Florida)