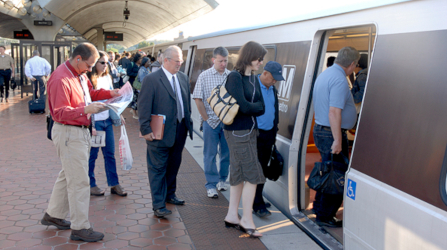 For the past two weeks, WMATA has been testing and calibrating the feature that had been discontinued for years.

Automative door opening and automatic train operations were part of the original design of the Metrorail system, but have remained unused for years due to “reliability problems,” WMATA officials said in a press release.

Now, WMATA may be returning to its automatic door opening feature later this year, granted its additional testing — conducted over the next several weeks — goes well.

The feature could eliminate wrong-side door incidents by train operators, as well as reduce door-open delay, a behavioral safety check protocol WMATA established that required operators to pause several seconds prior to opening doors to reduce the risk of a mistake.

When in automatic-door mode, the train receives data on its exact location from transmitters located on the track. After the train comes to a complete stop and is confirmed to be properly “berthed” at the platform, the doors automatically open on the appropriate side of the train.

Train operators will continue to be responsible for closing doors.