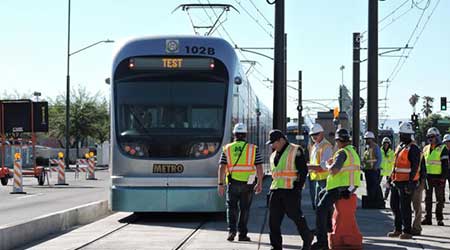 Valley Metro on Thursday plans to start vehicle testing on the Gilbert Road light-rail extension in Mesa, Arizona, to prepare for the 1.9-mile line's opening in three months.

On the first day of testing, a train will travel slowly along the alignment on Main Street from Mesa Drive to Gilbert Road as operational staff walk alongside it.

Testing will cover vehicle clearance at stations, the overhead electrification system, traffic signal coordination and the operation of the line's switches. Trains will run sporadically as testing continues, but will operate more regularly as the May opening approaches, Valley Metro officials said in a testing announcement.

The more than $180 million Gilbert Road extension runs from Mesa Drive to Gilbert Road. The agency broke ground on the project in October 2016.