The station also represents the first extension of the railroad's commuter service since it began operations more than 20 years ago, VRE officials said in a press release.

"We're excited to bring VRE to Spotsylvania County," said Doug Allen, chief executive officer of VRE. "It will provide our new riders a convenient, reliable, traffic-free commute and will benefit the whole region." 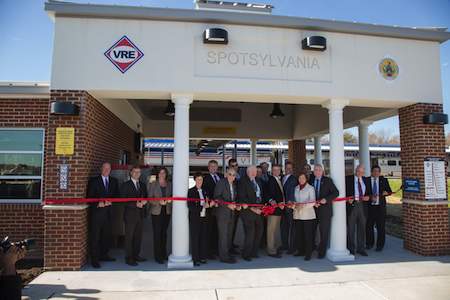 The station has a parking lot with 1,500 spaces, a waiting area with restrooms, and a 700-foot platform with canopy.

The cost of building the lot was $10.5 million, while the station and platform cost $4 million, according to VRE.

Seven VRE trains now depart from the new station each day. The railroad will add an additional train on the Fredericksburg Line and make minor schedule adjustments prior to the end of 2015, VRE officials said.