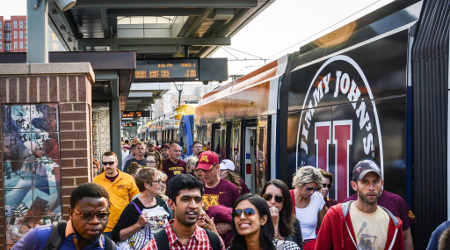 The Green Line between Target Field and Union Depot registered an all-time-high 13.8 million rides, up 5 percent from 2017's mark. Annual ridership now has risen each year since the line opened in 2014, Metro Transit officials said in a press release.

Meanwhile, ridership on the Blue Line in 2018 exceeded 11 million rides, setting a new annual record. The line runs south from Target Field to the Mall of America.

However, ridership on the Northstar commuter-rail service remained essentially flat year over year at about 787,000 rides. The Northstar Line runs between Big Lake and downtown Minneapolis, with stations in Elk River, Ramsey, Anoka, Coon Rapids and Fridley, Minnesota.

The ridership figures help show that investing in transit creates a stronger system that supports the growing region, said Nora Slawik, chair of the Metropolitan Council — which oversees Metro Transit — in a press release.

"[But] with around 700,000 new people expected by 2040, we need to figure out today how we get in front of the significant increase in transit demand," she said. "Our region relies on a comprehensive transportation system that offers mobility options to all people, in order to remain economically competitive and connect people with opportunities."

"While ridership is down by just over 1 percent, reductions in ridership were expected given [our] fare increase combined with lower gas prices. Overall, ridership is better than anticipated," said Metro Transit General Manager Wes Kooistra. "Still, future ridership growth requires long-term solutions to [our] budget challenges."